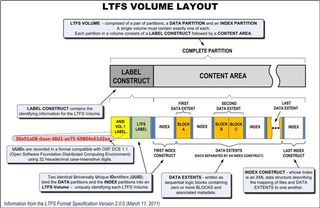 ALEXANDRIA, VA.—The Linear Tape File (LTFS) Format Specification was introduced to the broadcast industry at the NAB Show in 2010. LTFS was the output of the LTO Consortium, a group tasked to develop an open source file system specification offering shared access for linear digital tape. LTFS allows users, especially those in the broadcast, media and entertainment industries, to enjoy an open, flexible means for backup, archive and sharing of digital media files.

Fig. 1: LTFS Volume Layout The LTO Consortium, comprised of IBM, Hewlett-Packard and Quantum, developed the LTFS requirements for an interchanged tape that conforms to a self-describing format, meaning “one that holds its own index.” LTFS is specific to LTO-5, and its subsequent later generations, of linear tape. It is primarily intended for archive purposes.

Technically a trademark of IBM, LTFS is employed on the fifth generation of the Linear Tape-Open (LTO) format, known as LTO-5. LTO also goes by the name Ultrium-1, at format defined in ECMA-319 as a tape specification for four types of cartridges of differing lengths, supporting a 12.65mm wide physical media with 384 data tracks.

WHY LTFS?
Media and entertainment have a propensity to create large sets of huge files. With HD, 3D-stereoscopic, 2K and 4K content emerging everywhere, a means to store that digital data for backup, archive or to resolve overtaxed storage systems was necessary.

Industries that retain digital assets have traditionally used dedicated systems with proprietary implementations and vendor specific formats. As file sizes and asset volumes continue to increase, a means to extend long term storage was sought. LTFS offers users a self-describing, shareable media linear that is application independent and can handle large archives in an environment that users are accustomed to.

By creating a file system for tape-based linear media, data contained in a nonlinear file system; e.g., on a HDD or solid-state media, can now be managed on linear media as well. This improves storage costs and allows large archives to be easily stored offsite for disaster recovery purposes. Better yet, it allows the archives to be exchanged between other archive platforms that read LTFS.

In essence, LTFS allows a linear media to be mounted by a system, use tape-drive shareware in Linux, Mac or Windows OSs, and access the data as if were a conventional hard drive with “drag-and-drop” techniques. It’s like having a giant uncompressed or compressed memory stick.

LTFS is “application independent” meaning there is no requirement for additional backup applications to store files on LTFSformatted tape. As in other tape archive solutions, tarring (a method used to collect multiple small files into a single large for archive or distribution), of the files is not needed. Because LTFS is self-describing, with an open, shared file system; databases for the file indexes can be stored in a secure offline environment. This further aids in the ability to recover from corruption or a loss of the index databases, allowing users to simply put the tape in the drive and obtain access to the data years from now.

LTFS segregates the linear tape media with the file system indexes kept in one partition and the data in another, arranged by volumes using file marks and record constructs. An LTFS Volume uses standard POSIX (Portable Operating Systems Interface) file operations, allowing LTFS to be mounted without the need to access other information sources.

LTFS works at the operating system level. As such, LTFS files can be written to, and read from, the LTFS Volume and then passed between other sites and applications using only the information written in that volume. The goal of this architecture allows LTFS to be addressable by non-proprietary or alternative data management and archive solutions. Fig. 1 shows the layout for an LTFS Volume.

For now, LTFS is specific only to LTO-5, with future LTO generations also providing for LTFS capabilities. The data capacity for LTO-5 is 1.5 TB native uncompressed, or 3.0 TB compressed. The data transfer rate in native format can be up 140 MB per second; the equivalent to >1 TB of data per hour. The medium uses advanced metal particle, allowing up to 30 years of longevity and 250,000 hours MTBF at the full 100 percent duty cycle.

The LTO-5 Ultrium format offers tapedrive- based hardware encryption using the AES 256 bit encryption data key specific to the drive. LTFS eliminates the need for software or appliance-based encryption; however, LTFS can only be implemented on gen-5, and later, LTO tape. Users with LTO-4 or earlier may want to convert data so that it could be used in a file system-like environment.

Underway in standards development, and already in commercial implementation, is what will become an umbrella scheme for archiving data on linear and nonlinear mediums, those with or without a file system that are irrespective of the physical media. Dubbed the “Archive eXchange Format (AXF)” by both SMPTE and Front Porch Digital, AXF promotes a universal approach for the archiving data under an “object-based” model.

The industry should be aware that AXF is neither a replacement for, nor an alternative to LTFS. In fact, LTFS can and will continue to be usable in the AXF environment, and thus can live well into the future. The additions afforded by AXF include methods for the spanning of data across multiple mediums and the ability to embed information into archive objects, which aids in recovering and/ or decoding the data residing on the physical medium. The overarching advantage to this extensible AXF archive solution is that long after the original coders, encryption or formats are gone—users will still be able to use the data essentially through eternity.

LTFS has yet to be formally standardized, although SNIA has continued to have it on its agenda for quite some time. There are still implementation concerns and rights issues that remain of concern to some, which, over time are likely to get resolved as LTFS is more readily adopted on a global basis.

Karl Paulsen (CPBE), is a SMPTE Fellow and chief technologist at Diversified Systems.

For more insight on this topic, check out TV Technology’s ebook, “LTFS, A New Way to Archive.”