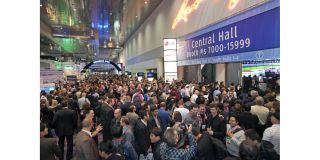 “Some 20,000 new products will launch this week at the 2013 International CES and we couldn’t be more excited to kick off this record-breaking show,” said Gary Shapiro, president and CEO of CEA.

Qualcomm’s chairman and CEO, Dr. Paul Jacobs, delivered the preshow keynote address Monday evening to highlight the company’s mobile roots. “We are at the heart of mobile devices that are the center of everything you do,” he said. He was joined on stage by Microsoft President and CEO Steve Ballmer to demo Microsoft Windows products that include the Qualcomm Snapdragon 10 processor. The Snapdragon 800 will be a premium processor for tablets, smartphones and full PCs and leverage the power of LTE, ultra HD and 7.1 surround.

Celebrity appearances were made by Director, Guillermo Del Toro, NASCAR’s Brad Keselowski and Marc Jenkins, “Star Trek Into the Darkness” actor Alice Eve and Scott Chambers and Big Bird from Sesame Street. The event capped off with a performance by Adam Levine and two other members of multi-platinum, three-time Grammy Award winning band Maroon 5.

The show runs through Friday, Jan. 11.