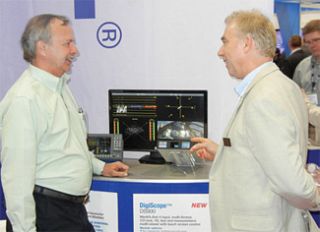 With the continued interest (if not overwhelming adoption) of 3D, test equipment manufacturers are coming up with solutions measure signals so ensure the desired 3D effect. And with recent changes in audio broadcasting regulations, devices to measure and log loudness levels were sprouting up throughout the exhibit floor.

IneoQuest introduced the Expedus DVA probe that monitors content as it is being processed, then performs checks on the content at various locations as it flows through the system.

MiraVid demonstrated its TeleSight Ultimate, which is a combination of multiviewer and bitstream conformance analyzer.

Sencore showed its VideoBridge transport packet monitor that uses IP, ASI and RF interfaces for continuous quality assurance of streaming media in a variety of compression schemes. The company added a 10GbE version of its VB330 dual-port probe, and also introduced the compact VB12-RF analyzer for QAM/VSB, ASI and IP analysis.

Snell debuted new functionality for its Centra control and monitoring system. Centra can detect and alert operators of system defects and operational issues, and provide the control elements to correct problems.

Phillip Adams (L) of Phabrix and George Gonos of Leader pose with the Phabrix RX2000 test & measurement platform. Photo by Dawley/KovacsVideo Clarity introduced the RTM Manager real-time monitor family of products. RTM Manager is a web server, event logger, archive and player with a web browser dashboard for instant remote status of one or more RTM units. The system is used in a television network to monitor a channel’s outbound AV quality, lip sync and ancillary data.

Volicon debuted the Observer ASI/transport stream monitoring and logging system, which gives video networks the ability to handle MPEG-2 and MPEG-4 transport streams, and retain the content and metadata carried within them.

Hamlet rolled out the Digiscope DS900 quad-multiviewer, a half-rack-width rasterizer with built-in screens that can monitor four signals simultaneously.

Leader unveiled the LV5770 multi-monitor that can simultaneously view signals from two 3G and HD/SD-SDI sources, displaying picture, waveform, vector and other displays.

Nevion introduced the FCS250-IP, which provides video-over-IP monitoring capabilities. The module installs into any Nevion Ventura chassis and supports full wire-speed monitoring of up to 512 IP flows on an electrical or optical network interface, simultaneously performing analysis of video-over-IP traffic on Ethernet, IP, UDP and RTP layers.

Danny Wilson (R) of Pixelmetrix gives a tour of the company's StationView monitoring system to Neil MacTaggart of Media Asset Capital. Photo by Dawley/KovacsPhabrix is distributed in the U.S. by Leader, and the company's products were shown at the Leader booth. Highlighting the display was the RX2000 Test & Measurement platform, which houses four modules to measure 3G, HD-SDI and SD-SDI signals, with audio monitoring capability as well.

Tektronix lifted the curtain on the WFM/WVR5200 waveform monitor/rasterizer. The rasterizer version fills just 1RU and a half-rack width, and provides 3G and HD/SD-SDI compatibility.

Coaxial Dynamics showed its high-power series directional RF wattmeters, including the 81100-A. By inserting a line section with a test probe into the transmission line, it can provide continuous measurement of forward and reverse power. The company has line-section wattmeters for transmission lines as large as 6-1/8 inches.