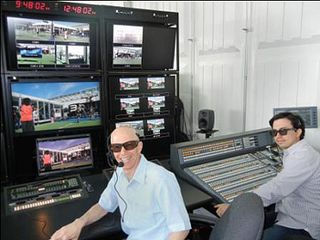 3D was a predominant theme at the 2011 NAB Show. In his NAB keynote address, James Cameron, Oscar-winning director of the 3D blockbuster, Avatar, pledged to evangelize and educate America about 3DTV and to help the production community transition to 3D with training centers, workshops, technology and more.

Director Andy Rosenburg and technical director Paul Harvath worked behind the scenes to do live 3D video at 3ality's display in the outdoor exhibits. On the NAB floor, the range of 3D tools has mushroomed since 2010 with a new crop of 3D camera rigs, standalone cameras, lens systems, recorders, monitors, routers, convertors, mixers and software for capturing better 3D, and managing 3D workflow, etc. There was no scarcity of other 3D hardware and firmware at NAB this year.

3ality Digital introduced its TS-5 Light 3D rig, a streamlined version of its TS-5 mini beamsplitter rig for Steadicam and for handheld use. Even smaller is its new Handheld Wonder Module, for use with even smaller, lighter cameras including a sync source, flip.

Codex Digital demonstrated 3D workflows with the Codex Studio Recorder and Codex Portable which capture two 4:4:4 or 4:2:2 HD streams locked in sync, for playback or output to an NLE. The Codex Virtual File System can rapidly output 3D .mxf files with 1D/3D LUTs and 3 optional levels of DNxHD for digital dailies and offline 3D editing.

Data Video had the smallest integrated 3D camera at NAB. The Live S3D-1’s lenses can be brought even closer together than human eyes and controlled via WiFi or USB.

Doremi Labs’ Dimension 3D converts from and to most 3D formats with frame rate changes.

Element Technica’s Atom can be switched from side-by-side to beamsplitter mode and uses the same controls as other E.T. 3D rigs. Live interaction among all 3D functions, for all resolutions and workflows, with SGO’s DI & Stereo 3D Mistika.

Genus’ Hurricane Rig, (by Alister Chapman) is light enough for handheld 3D shooting, thanks to manual versus digital 3D controls. It supports cameras up to 9 pounds and can be switched from beam splitter to side-by-side mode.

Go Pro showcased the HERO 3D System, the smallest side by side 3D rig at NAB. The 3D case, an underwater housing, operates down to 180 feet. GoPro now owns Cineform and bundles Hero with 3D Cineform Studio for editing, uploading and viewing of all 3D files.

Meduza Camera Systems previewed the world’s first integrated 4K 3D camera. Its 4096x3072 sensor can be upgraded as larger sensors become available. Interaxial and convergence can be adjusted remotely. This 15 pound camera can be leased starting in 4Q.

Polecam introduced its 3D-Capable Head for use with paired HD mini-cameras like Toshiba’s IK-HD1 and the HRO69. The 3D-Mounting Plate attaches directly to all standard Polecam rigs and is optimized for studio shooting and close-ups.

Steve Hertler (R) gives a demonstration of the Element Technica Atom Pro stereo rig to Mithun Dsouza from Pixion in Mumbai, India.P + S Technik’s Evolution Freestyle Rig has heavier duty plates and adjusters for use with cameras like Alexa and RED. The Mini 3D recorder/viewer (by 1 Beyond Wrangler) features a 10.4-inch 3D screen and processes stereo raw in real time.

Redrock Micro’s Micro3D SxS 3D rig accommodates two smaller video cameras or DSLRs in a side by side (SxS) setup with a full suite of locking adjustments for 3D setups. It weighs 8.6 pounds plus an optional shroud for use with Canon XF 105 camcorders.

Stereotec debuted a new 3D mirror rig for larger cameras like RED ONE, as well as a Steadicam-friendly Stereotec Mid-Sized Rig, plus a new Side-by-Side Live Rig for various cameras.