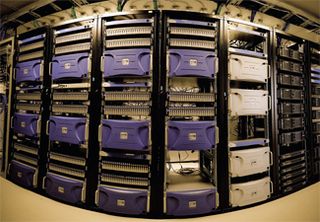 These were just a few of many stellar moments from the Vancouver Olympics. Valuable content like this is best served hot—that's how a host broadcaster at an event such as the Winter Games can maximize its value for rightsholding broadcasters. Seconds matter.

The International Broadcasting Center In Vancouver, the International Olympic Committee was fully in charge of the host broadcast for the first time. Judging by the number of beneficial services now available to rightsholding broadcasters, the change should be well-received.

In the past, the responsibility of setting up the host broadcaster at the Games was with the city organizing committee. Now, in a process that has been in transition for several years, the IOC has decided to make the broadcast production an internal process through the creation of Olympic Broadcasting Services (OBS).

Sotiris Salamouris, head of engineering for OBS, said the move was based on the realization of just how important broadcasters are to the Olympic movement. He said the switch from an ad-hoc host broadcaster created by the organizing committee to an organization that can maintain continuity between Games would make a hard job a little bit easier.

"There was always a kind of learning process for a big part of our staff," said Salamouris. "Now we can make use of stored knowledge in a more efficient manner… more long-term planning in our systems and economies of scale, and we are able to offer more and more from Games to Games without exploding our budget."

At the time of the interview midway through the Games, Salamouris said they were thinking about London already, whereas a traditional host broadcaster would not be worried about what was on the horizon.

HD IN THE MOUNTAINS

Although Vancouver was the first fully HD Winter Olympics, OBS had already cleared the HD and 5.1 hurdle in Beijing. Winter Olympics are always tough broadcasts, however, due to weather and hard-to-access mountain venues spread across great distances.

"It is like splitting the Games into two locations, and this creates a lot of technical plus logistics problems," said Salamouris. "And half the Games is in a different location—half in terms of size, in complexity."

For transmissions from the venues to the International Broadcasting Center (IBC) OBS followed the same concept established in Beijing—broadcasting uncompressed signals over an underground, redundant optical fiber network, in this case provided by Bell Canada, the communications supplier for the Games.

OBS also had DSNG trucks serving as back-up. "In all the years we have had them we have never had to actually use them, but they're there," said Salamouris.

Salamouris said the advent of video servers had made a huge difference in allowing the host, and rightsholders, to access event content quickly.

A server infrastructure has become more and more integral to the broadcast over the last decade, moving far beyond its traditional role in live production applications such as slo-mos, replays and brief time shifting.

Salamouris said getting good content quickly out to viewers mattered more now than ever before. "What happened in the broadcasting industry [during] the dotcom and telecom boom in the years before 2000, there was a lot of capacity built to distribute content around the world," he said. "Now the issue is not the capacity of the broadcasters, the problem is the content itself, and the content is very valuable and hard to produce. If you have content you better use it and put it in one of your distribution platforms, quickly. As the host we are providing economies of scale for rightsholders to do things that they could not afford to do themselves.

"The value of the Olympic content is huge, but this does change at the end of the Games," Salamouris continued. "It is still quite valuable after the Games, but the difference between its immediate value during the Games and then afterwards is significant."

To maximize the value of the Olympic content for rightsholders OBS launched or greatly expanded several existing offerings, including the Olympic News Channel, the Multichannel Platform, and the new "venue unilateral server" service.

After a 25-person trial run in Beijing, the Olympic News Channel (ONC) grew to include a staff of 75, which is even more impressive when the much smaller size of a Winter Games is considered. The ONC is basically a 24-hour news channel operation on the Games, and consists of ENG crews and production teams using the events' recorded material and ENG-style content to create feature stories and sport highlights after the end of competition. This compares to past Games where two daily 1-hour highlights feeds were offered to the broadcasters at the IBC.

Salamouris said the workflows were significantly improved in Vancouver compared to what had been done in Beijing. From a technical perspective, the ONC made some very real connectivity improvements between venues and the IBC, as ENG teams now had the option of using either file-based or baseband transmission to get material back to the production rooms.

ENG teams would generally do a first rough cut at the venue, using EVS' Xedio platform, P2 laptops from Panasonic, or sometimes Final Cut Pro. Both Xedio and the Panasonic laptops allowed file-based transfer over Gigabit Ethernet connectivity, and the Panasonic units also allowed a more traditional baseband transfer if that suited an operator's comfort level.

"The file-based transfers [were] a big success of these Games, as it proved to be very efficient," said Salamouris. "We are doing transfers in less than half of real time, plus by sending files we are sending the logging metadata that describes the content… it's a major advancement for the guys here at the IBC because they can retrieve directly and easily what they want."

The ONC went down OBS' distribution channels, and while it was seemingly ideal for smaller broadcasters with limited recording and staffing resources on site, it was also appealing to larger organizations as an add-on. Salamouris said NBC used ONC material with its included commentary for one of its HD cable channels. Sky Italia was another big user of the ONC.

The server room at the IBCMULTICHANNEL CREATES A WINTER GAMES AUDIENCE

Another OBS option that helped rightsholders fill their channels with great content was the "Multichannel Platform," a 5-channel satellite-based distribution service of raw feeds of the day's events coupled with the edited ONC channel. OBS picked up the best content, some live, and some playback of recorded content in the evening when events were not happening live, for satellite transmission to rightsholders with no or little presence in Canada.

The Multichannel Platform helped smaller broadcasters get a lot of raw content home in a hurry.

SKY Television of New Zealand, a combination pay/over-the-air broadcaster with decent channel capacity, was a Multichannel customer. SKY established an audience for the Winter Games in a country that has in the past generally just shown a daily highlights package of these events. In Vancouver they dwarfed what had been done before, adding four 24/7 SKY Sport Olympic Games channels (SKY Sport 4, 5, 6, and 7).

The Vancouver Games were a ratings success for SKY. And they did it with just 20 or so staffers in Vancouver, supporting a larger crew back home taking in the Multichannel Platform feeds.

OBS had anticipated about six users for the Multichannel Platform, but more than 20 broadcasters signed up, including many larger rightsholders using it as a supplement.

Also debuting in Vancouver was OBS' "venue unilateral server," which gave broadcasters with a presence at a venue complete access to all content recorded in the servers inside OBS trucks, at the same time as the OBS team. This provided broadcasters more content, quickly, and could make their presence at the venue less costly. NBC was a big customer.

To make the unilateral server concept work, the OBS engineering team established an additional EVS server farm linked to the OB van server farm via GigE connectivity. This high-speed connection allowed OBS to push high-value clips—often slo-mos and replays—from the truck to the server in the compound, and this server was directly accessible to subscribing broadcasters. The rightsholders could then get the same material OBS was getting, right away. They had access to all this material that they otherwise would not have had, unless they were taking baseband splits of all host cameras.

From Slo-Mo to XMO

The latest generation of hi-speed playback, the XMO, made its Winter Olympics debut at Vancouver. XMO cameras captured some amazing pictures at a Winter Games for the first time—perhaps the most memorable were up-close shots of short track speed skaters' blades, cutting the ice and throwing off shaved ice.

XMO is a nice three letter acronym that stands for extra motion, said Sotiris Salamouris, Head of Engineering for host broadcaster OBS. "We tried to call them something more official sounding like 'super high speed cameras,' but everybody ended up just calling them XMOs."

Current generation broadcast cameras used in traditional slo-mo can record only up to 3x faster than standard, which translates back to 3x slower in slo-mo playback. XMO cameras can record at frame rates quite a bit faster than this, up to 5 to 6 times normal speed. One of the two XMO cameras deployed in Vancouver could record up to 1000 fps or more. The main advantage of traditional slo-mo cameras is that they can also play back live—they are used as a normal camera, always providing a signal, and a director can always go back and provide the slo-mo replay. This means the camera position functions as a normal camera.

Salamouris said that slo-mo capture and now XMO is another way broadcasters can provide the home viewer an experience impossible for him to see by himself, even at the stadium or venue.

"In the early days of sports on television it was like an enhancement of a viewer's typical experience in a stadium," he said. "It was like providing the viewer with nice and fast binoculars."

Now, broadcasting has become a true enhancement of the sports coverage because viewers can really see the effort of the athlete, the detail of their moves. "For example, in the [skiing] aerials, you can see how each is landing in the snow and why one is doing better than another, or why one figure skater deserves a better score," said Salamouris.