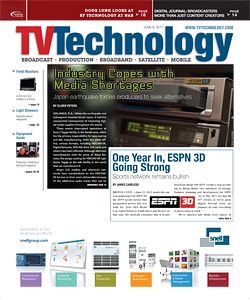 
INSIGHT
GUEST EDITORIAL:ATSC 2.0: The Road Ahead, by Mark Richer
EDITORIAL:McAdams On: This Is About Antennas, by Deborah D. McAdams
INSIDE AUDIO:Getting CALMer, Bit by Bit, by Dave Moulton
RF TECHNOLOGY:RF Technology at the 2011 NAB Show, by Doug Lung
LIGHTING TECHNOLOGY:No Dimmer Rack in the Studio of the Future?, by Bill Klages