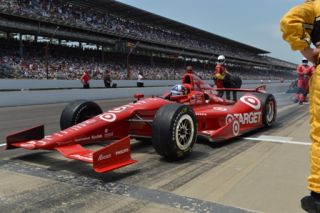 Indy 500 champion Dario Franchitti’s car sported an HD camera atop the airscoop, behind the driver.

INDIANAPOLIS: The 2012 Indianapolis 500 was a victory for first-place driver Dario Franchitti, But ESPN was victorious as well, thanks to its stable of 95 cameras that completely covered the race—including 48 cameras mounted in the cars themselves.

This year’s field of 33 cars were all running on the new DW12 chassis, according to Dennis Cleary, ESPN’s manager of motor sports’ remote production and operations. “This chassis was specifically designed to carry four small HD cameras onboard; up one from previous versions. A remotely controlled 360 degree camera is built into a bubble on the wing. The others are mounted on the body to provide a forward shot, a looking-back shot, and a view of the driver.”

Twelve cars had this equipment in place for the race. The other 21 cars had weights installed where the cameras would go, to ensure that all of the cars were on a level playing field.

SMALL AND RUGGED
The Indy cars’ onboard HD cameras were specialty units made by Broadcast Sports Inc. (BSI), in Hanover, Md. “These cameras are extremely small and rugged,” said Peter Larsson, BSI’s GM of broadcast services. “They fit into special aerodynamic housings on the cars, and are wired back to two onboard HD transceivers.”

One transmitter with two encoders that transmitted two video signals in each of the 12 camera equipped cars allowed ESPN to provide viewers with dual window shots simultaneously. “This year, you got to see what the driver was seeing, while seeing them steering as well,” Cleary said.

The HD signals from the cameras were relayed by microwave to an army of ESPN production units onsite. In the past, ESPN had used a helicopter orbiting overhead to receive in-car video feeds.

“However, with the advent of digital technology, we were able to switch to antennas mounted at ground or near-ground level around the track,” Larsson said. “The feeds from these antennas—which are two-way—were connected by fiber to a BSI controller. Besides handling communications between the cars and the ESPN production unit, the controller automatically sensed which antennas had access to the strongest signals at any given time, and switched to them.”

AROUND THE TRACK
ESPN’s Indy coverage was designed to completely cover the action. To this end, the network mounted Sony 3300 Super Slo-Mo (SSMO) cameras at all four of the Brickyard’s corners. Sony 1000s covered the inside back stretch, inside the Start/ Finish Line, and Turns 1 and 3; plus the pit areas (five cameras). Sony 1500s were used on jibs over the Pagoda Plaza and Victory Lane, among others; as handhelds at the Start/Finish line and the Pit Area exit; and as fixed cameras for the on-site studio.

Robotic Sony HDL 40 cameras were deployed in hard-to-reach areas like the North and South Chutes. There was also a camera mounted on a Helivision helicopter using a Cineflex V14HD gyro-stabilized camera system; numerous cameras like the Iconix IK-HR1S placed at “pointof- view” locations around the track, and the famous BatCam, a robotically-controlled HD camera on a cable. Strung between Turns 1 and 4, the BatCam could race along its cable at speeds up to 80 mph.

Dennis Cleary, ESPN’s manager of motor sports’ remote production and operations The BatCam’s ability to move around gave viewers all kinds of unique views. “We can use it for beauty shots, crowd shots,” said Rich Feinberg, vice president of ESPN’s MotorSports Production. “We can use it to document pit row because it literally flies over pit row and a portion of the racetrack. We can also use it for coverage as the cars are coming down the front stretch headed towards Turn 1.”

PRODUCTION CHALLENGES
Having access to 95 camera feeds is enough to make any director’s head explode. This is why ESPN used a chief spotter in its main Master Control trailer.

“The chief spotter sits between the director and the producer,” said Bruce Watson, ESPN’s race director and the man who was calling the shots at this year’s Indy 500. “They keep an eye on what’s developing on the track, and advise on which shots could be switched to next. This way, the director and producer can stay focused on what is happening right now.”

To do all of this, ESPN deployed a fleet of nine HD production trailers at the Brickyard. “We brought them in from various locations, including our NASCAR unit that was most recently shooting in Iowa,” Cleary said. “All told, we had about 200 people in our crew at the Indy 500. It was a very busy shoot.”

Yet it isn’t the size that was the biggest challenge for ESPN’s crew; it was the learning curve. “There’s no track quite like the Brickyard,” said Cleary. “It’s not quite an oval, and it is not like anything we deal with for NASCAR. So the Indy 500 is always a test of our pre-show planning and live broadcasting abilities. In this way, it’s as big a deal for us, as it is for the drivers who compete here.”