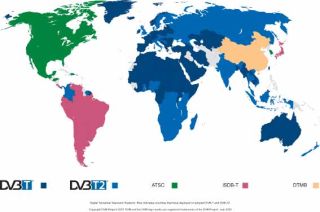 The massive growth of mobile and Internet-connected devices, plus the expanding range of TV content delivery options—over-the-top/Internet, video-on demand, mobile television, HDTV and 3DTV services—are transforming the global content landscape. This transformation requires broadcasters to sharpen their competitive edges to remain successful. This is especially true when it comes to their choice of digital terrestrial television (DTT) broadcast platforms.

Broadcasters need DTT platforms that are able to move huge amounts of data across a growing number of channels. In many instances, this will require the allocation of additional frequencies in the UHF IV and V bands used today for digital television broadcasting.

DVB-T is the most widely deployed DTT system, with deployments in more than 70 countries and 45 other countries having adopted it. Besides being widely adopted, DVB-T is a low-cost option; supporting receiver prices as low as 15 euros. There are now two DVB standards to choose from: DVB-T, and the newer DVB-T2. Which should a broadcaster choose? There is no simple answer; and there are tradeoffs to be considered.

The DVB-T standard has been DTT’s workhorse since it was published in 1997. Developed by the DVB Project to provide large economies of scale and low receiver prices, DVB-T offers high spectrum efficiency compared to analogue signals. It has allowed network providers to offer a range of SD and HDTV, interactive, radio, IP and datacasting services. The standard is also flexible enough to be used with the MPEG-4 standard, among others.

Based on reports from www.DVB.org as well as our analyses, DVB-T has delivered considerable benefits on a wide scale. It has enabled improvements in single frequency network (SFN) coverage in situations where multiple transmitters are operating on the same network, and in indoor settings such as sports venues.

Unfortunately, amidst increasing volumes of data, channels and delivery-speed requirements, DVB-T’s vast capabilities may not be enough. With more than 260 million TV households globally now able to receive a DTT signal, the need for increased spectrum capacity has never been more pressing, whether for incumbent broadcaster or for nations working to make one of their most valuable resources—TV spectrum—more efficient.

The DVB Project’s next-generation DVB-T2 standard appears to be up to that task. DVB-T2 is designed for the spectrum hungry. On average, DVB-T2 delivers at least 50 percent more spectrum efficiencies than DVB-T—and supports any SD, HD, and mobile service. This makes DVB-T2 worth considering for countries that already have deployed their DVB-T systems, those planning a launch or those that haven’t decided which DTT system to adopt.

DVB-T2 is more robust and has higher capacity than its predecessor. It allows the re-use of existing set-tops and rooftop antennas, and also works with PCs, laptops, in-car receivers, radios, dongles and other receiving devices. In addition, DVB-T2 features a superior SFN application. It supports a reach area of approximately 140 miles versus the 40-mile radius enabled by DVB-T.

For regions such as Europe with many adjoining countries with multiple small transmitters, DVB-T2’s capability will significantly reduce signal interference. It will also make it easier to arrange spectrum allocations between nations.

Mindful of the huge increase in mobile devices—upwards of 50 billion by 2013, according to IBM estimates—the latest DVBT2 update now includes the DVB-T2-Lite subset. It uses the latest modulation and coding techniques for the delivery of audio, video, and data services to fixed, portable, and mobile devices.

According to the DVB Project Office, DVB-T2-Lite is the first transmission profile type to use the Future Extension Frames (FEF) approach. This is meant to ensure that the standard can be easily made compatible and enhanced in the future.

The practical economic benefits of DVB-T2—and its ability to support a lower-cost transition to HDTV and datacasting—may be the most compelling arguments for adopting this standard. Given the dramatic increase in spectrum efficiency, DVB-T2 actually lowers licensing costs per content service and decreases transmitter-site power costs. This reduces overall capital and operating expenditures over time.

From an infrastructure perspective, most current DVB-T infrastructures can be reused in DVB-T2 deployments. This can minimise capital and operating expenses. However, although some headends and exciters are MPEG-4/DVB-T2 upgradeable, others will require replacement.

The full compatibility of DVB-T2 with DVB-T makes it possible for countries to fully use their spectrum going forward, accelerate the launch of new services, and fully replace analogue services with digital substitutes. This can be achieved whether these countries immediately adopt a DVB-T2-based approach, or maintain their DVB-T infrastructure while initiating DVB-T2 adoption for the longer term.

DVB-T2 makes it easy to transform global content. With just one program, content can be easily repurposed from different standards-based transmission systems within the DVB family. No conversion is required. DVB-T2’s stipulation for power-efficient receivers and mandated use of MPEG-4 AVC for more efficient compression enables the carriage of more SD channels and the introduction of HD content. With its ability to accommodate four to five HD programs in a single multiplexed stream, DVB-T2 also offers a much more efficient way to add new or additional HD services.

Although DVB-T2 receivers are currently more expensive than are DVB-T receivers, we believe the gap in receiver costs will lessen significantly once a high volume of DVB-T2 TVs become widely available. Because DVB-T2 can support more services, we anticipate that consumers will receive a better value.

Starting with the United Kingdom’s March 2010 launch, the global uptake of DVB-T2 has been quite healthy. According to the DVB Project Office, 15 countries have deployed DVB-T2; 33 countries have adopted it; and eight countries are currently undertaking DVB-T2 trials. This brings the total of DVB-T2 countries to 56 (see the chart, DTT World Distribution, by Platform).

Driven by spectrum and analogue shut-off issues, Europe has seen a significant amount of DVB-T2 deployment activity. This includes the rapid national efforts in Italy, Sweden and Finland. Over the past 18 months, DVB-T2 pay-TV services have been launched in Nigeria, Uganda and Zambia. Many more African nations expected to follow soon. DVB-T2 services are on air in Taiwan and Vietnam. The standard has been adopted in Colombia, Indonesia, Malaysia and across Southeast Asia, home to more than 500 million people.

TRANSITION CHOICES
In terrestrial transitions, having good alternatives is an asset. The DVB family offers solid options. We see three. For those seeking a mature technology and affordable receiver costs in price-sensitive markets, DVB-T may be the best choice. With its advanced technologies and vastly improved spectrum usage, DVBT2 is an excellent choice for greenfield build-ups—and for established DVB-T markets with pressing spectrum issues. A third option is maintaining a current DVB-T infrastructure while making stepwise efforts to adopt and then fully deploy a DVB-T2/-T2-Lite system.