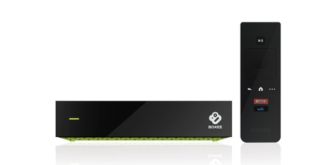 After rumors of its impending release began to surface last week, New York City-based Boxee quickly took the wraps off its new Internet-connected player: the $99 Boxee TV. It’s a radical new design that contains an antenna to watch OTA broadcast HD television and a DVR system that gives users unlimited online storage of recordings on the cloud.

Unlike DVRs, which store programs on a hard drive within the device, Boxee’s “no limits” DVR instantly uploads recorded content via Wi-Fi or Ethernet into a storage locker on the Internet. It costs $14.99 a month for unlimited use. Users can access recordings either on a television through the Boxee box, or on any Internet browser on a computer, tablet or smartphone on the Boxee website.

Users who pay a monthly subscription fee get an infinite amount of online storage space for recordings. For those who do not pay for the cloud service, the amount of storage space is reduced.

The new Boxee TV comes with an antenna that can pick up HD feeds from stations that carry NBC, CBS, ABC and other networks (for those within the broadcast area). There’s also a cable input on the back of the device for subscribers to basic cable service.

The Boxee’s cloud-based DVR service is similar to the controversial Aereo DVR service currently being fought in court by broadcasters. Instead of relying on Aereo’s servers for reception and recording, the Boxee TV itself tunes into the programming and then streams it to Boxee’s servers, which store it.

Boxee’s system is more flexible than Aereo, since it can conceivably work with any OTA transmitted content and is not limited to New York City, where Aereo is currently confined for now.

Avner Ronen, Boxee’s CEO, told the Huffington Post that DVR storage feeds are truly unlimited. If a user wants to, he said, they can record all day, every day and will not hit any kind of storage limit. The Boxee TV can record up to two channels simultaneously.

The Boxee TV comes loaded with several apps, including Netflix, YouTube, iTunes, Vudu and Pandora. More apps will be announced at a later date, according to Boxee, though the company will keep the number of apps small in order to avoid clutter. The Boxee remote control has been redesigned and now features dedicated buttons for Vudu and Netflix.

Boxee is taking preorders for the device on its website, and the Boxee TV will be available Nov. 1. The DVR service will premiere on that date in the top eight television markets: New York City, Los Angeles, Chicago, Dallas, Houston, Atlanta, Philadelphia and Washington, D.C. Later, it will roll out in additional cities.