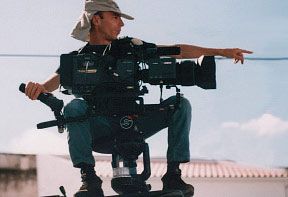 Languages spoken: Portuguese and English, some French and Spanish.

How long have you been a cameraman?
For about 20 years.

Current assignments. Where, doing what, shooting for whom?

Currently I dedicate most of my time to an NGO (non-governmental organization) called Help Images, of which I'm one of the founders. Help Images works in "Media for Development" helping other NGOs to have proper media to represent their work and in doing so, leverages them.

I get involved in all the processes; talking to the clients, finding their needs, writing the treatment and sometimes the script, organizing the crew and the right equipment, shooting, sometimes directing at the same time, and finally, supervising post production. Welcome to the non-profit world!

I also lecture camera work at Restart, an audiovisual school in Lisbon.

Have you been busy?
We are in an economic crisis, so companies and the government invest less in media. Agencies and production houses get less work, major broadcasters are firing people, half of the market owes the other half. Banks are not lending money, there are a lot of production houses in trouble and freelancers too. People are getting less money and working many more hours.

Still, when you are shooting, you don't have time to do anything else. Once you stop you have to re-organize your life and start looking for some more work or try to get payment for the job you did three months ago.

Shooting where?
Most of the time in Portugal, but I often go to London and with Help Images I've been in several African countries.

You have directorial ambitions: why and what sort of productions would you like to handle?
I like to work with people, telling stories, building emotions and changing mentalities.

At the moment I'm directing more documentaries, working with real people, real stories. But my playground is more fiction-drama mini-series, and that's what I would like to handle in the future. Working with actors, bringing characters to life, building layers and experiences into the script -- seeing scenes come to life without neglecting the power of images because those are already in my blood.

Is Portugal a good base for shooting in Europe? Why?
It's a fantastic place for shooting! The pluses: the weather, the food and the friendly people.

Also it is the most western coast of Europe with the south close to Africa, with fantastic beaches and clear water. The sun shines on average 300 days per year and the light is very bright and clear; very similar to Sydney. From the architectural point of view, Portugal offers a lot of location options. These include old castles, stone buildings, and cities full of narrow streets to the new high-tech site in Lisbon.

Portugal is a small country that borders on Spain. In a six-hour drive from Lisbon, you can reach Madrid, and in 2.5 hours you get to the sunny beaches of the Algarve, then three hours to the beautiful city of Porto.

In Lisbon, you can hire top shooting equipment from good reliable rental companies. You can grade or post in Lisbon, and surf during the lunch breaks all year-round.

What types of productions do you currently shoot?
Documentary, promos, drama series

What was your first ever shooting job?
My first shooting job was camera op in a comedy series for RTP, national television.

Most recent, interesting assignments?
A documentary about the importance of local radio in Africa; how radio is so important and powerful in underdeveloped countries. We look at how governments sometimes try to manipulate the only channel of communication in places without newspapers or TV.

The obituary is one of the most listened slots on radio, so people can know who died last week!

Current camera equipment you use?
Sony EX3, Red One, Canon 5D and 7D.

Other gear you have access to?
Steadicam Pro, fully equipped.

What useful piece of gear do you wish someone might make?
A portable, all-weather, indestructible data storage unit. And a portable interface to download your thoughts, memories and dreams.

Best thing about your job?
Every assignment is a new challenge to find the best visuals to tell the story .

Worst thing about your job?
When you finish a project, especially a long one, you always feel you are losing something, like when you are leaving a friend at the airport for an unknown period of time.

Dullest assignments and why?
Covering bullfighting and political conferences. I don't like to see animals suffering and fighting for their lives.

Hairiest/scariest assignments and why?
Darwin, Australia documenting a local ranger taking care of huge crocodile traps. I ended up changing chicken bait on top of this floating cage; every minute felt like an hour. Chicken, oh yes!

What country do you most like to shoot in?
I'm a travel lover and every place where I shoot has its charm and enchantment. But shooting in Portugal is more comfortable for me, as I know the language, culture, geography and people.

What's your taste in music?
Depends on the mood, but music is one of my greatest needs in life.

Favorite food?
Every food that brings people together around the table, and some wine please! That's why I like to cook so much.