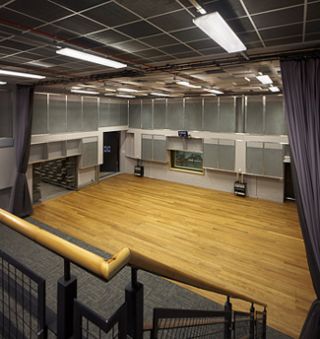 Sound is as important to a broadcast television centre as video, but, certainly in the past, it has often been consigned to a corner of the main production gallery or segregated completely in its own area away from everything else.

A multipurpose audio studio The audio rooms for each main studio at The Studios block of MediaCityUK (MCUK) in Salford Quays are separate from their vision counterparts but are connected by double-windows and are certainly on an equal footing in terms of technology and real estate.

Nor are the sound galleries the only audio component; also within the concrete and glass centrepiece of The Studios are the Philharmonic concert studio and a multi-purpose audio studio (MPAS). The acoustics, and those of the TV studios themselves, were designed by specialist consultancy firm Sandy Brown Associates (SBA), which also worked on treatments in the dedicated BBC buildings at Salford Quays.

Mark Howarth, a partner in SBA based at the company's Manchester offices, acknowledges that the Philharmonic studio and MPAS would immediately appear the most demanding parts of the building project acoustically, but says the TV studios have also been designed to "a very high level of performance".

Howarth explains that a basic 'shell and core' design was provided to SBA. All the key studios are fully isolated box-in-box structures, with four big spaces on the ground floor and three smaller areas on the first floor. As the latter studios are situated above the MPAS, Howarth says full isolation using completely floated rooms was absolutely necessary.

The Philharmonic studio is the new rehearsal and recording space for the BBC Philharmonic Orchestra. The audio control rooms are similarly isolated and insulated, with sound absorbed by perforated metal ceiling tiles and fabric-wrapped wall panels. Julian Boden, director of engineering for MediaCity Studios Limited (MCSL), describes the sound galleries for the main studios as being "quite a reasonable size". This is something of an understatement as they are substantial and considerably larger those in many other studio centres.

The amount of space is primarily to accommodate both the Genelec 5.1 loudspeaker monitoring systems and the digital audio mixing consoles. Galleries for the big HQ1, 2, 3 and 4 studios have Calrec Audio Apollo desks, ranging in size from 56 to 64 faders. Calrec Artemis desks are installed in the smaller HQ5 and 7, with a Yamaha DM1000 for HQ6. Most of the audio control rooms feature a smaller console to one side, known in BBC parlance as the 'grams' mixer. This is used in conjunction with two SpotOn playback systems for sound effects and music inserts.

The consoles are networked using Calrec's Hydra2 routing system, which gives each access to all inputs and outputs. Julian Knight, chief technology officer of principal systems integrator TSL, points out that Hydra connection boxes were installed on the studio floor to give "digits right from the point you plug into".

This networking is mirrored in the intercom installation, which is based on the German Riedel Communications Artist system. The initial installation was of a 928x928 port matrix comprising nine Artist digital matrix intercom mainframes, specifically six Artist 128, two Artist 64 and one Artist 32. Riedel's Performer DPL belt packs and interfaces are also being used.

Boden explains that the intercom has been configured so that the control panels can be switched between the different crates (rack units), while keeping the individual ring systems independent. He adds that overall MCUK is using over 1000 panels, which is nearing the maximum that can be used on a system. Knight observes that the customisation for BBC Sport's requirements has doubled the number that would be used for a standard set-up.

Right at the back of the building is the audio post-production area. This features a voice-over booth looking into the dubbing theatre; it is equipped with an AKG 414 condenser microphone, with split-feed headphones and a Sonifex commentary unit, although Riedel commentator equipment is being used elsewhere.

Calrec kit in a sound gallery The audio post market in Manchester is growing considerably, with both additional suites and brand new facilities opening this year in the city centre as well as at other MCUK buildings. With an already high volume of dubbing and track-laying work at The Studios Boden says there are "definitely" plans to expand the sound dubbing department, which is currently centre on a single theatre. This is based on an Avid Pro Tools digital audio workstation with an ICON mixing control surface. Boden explains the Pro Tools system features an Avid client that allows audio from a video sequence to be "pulled straight across" for dubbing. Genelecs are again used for 5.1 monitoring.

The Studios' post-production management sees a requirement for up to four dubbing rooms and track-laying facilities. Meanwhile, says Boden, the MPAS could be called into action as a second re-recording area, with a plan in place to fit it out with Avid Pro Tools and Avid Video Assist.

The dubbing suite and sound galleries were installed by TSL but the audio-only Philharmonic concert studio and MPAS were sub-contracted to IPE Systems. The MPAS is designed primarily for radio drama, Foley recording and music recording sessions. It has a live area and a dead zone; this impressively disconcerting space is described as a semi-anechoic chamber, because it is not completely sealed, and is used for simulating external scenes in dramas. Mark Howarth says the least obvious aspect of the MPAS is its moving walls, which are moved electronically to produce different acoustics.

The control room is surprisingly big but this is to accommodate the larger number of editorial staff that works on radio drama productions. The main mixing console is a Studer Vista 9, with a Yamaha 02R for grams, again working with SpotOn. Recording is on to Pyramix and SADiE DAWs, with the possibility of adding a Pro Tools systems.

The Philharmonic studio is the new rehearsal and recording space for the BBC Philharmonic Orchestra. The main studio is 22 metres by 26.8 metres, with a 16.5 metre high ceiling. This visually and acoustically striking room includes floor sections that can be raised and lowered using a pump system. Acoustic treatment in the form of 50mm foam is fitted behind timber slates on the walls, working with modular box low frequency absorbers. The amount of absorption can also be altered using 100mm fabric-wrapped oblong sail-like reflectors, likened to duvets, on the walls.

The initial installation of the Riedel Communications Artist system was of a 928x928 port matrix comprising nine Artist digital matrix intercom mainframes. Mixing in the control room is also on a Vista 9, which, like the Calrec Apollo and Artemis, had only just been launched at the time installation work was beginning. John Chalmers, managing director of IPE Systems, says the original intention was to use Vista 8s for the Philharmonic and MPAS but these were upgraded as the new version became available. The studio is wired for 5.1 but most of what is recorded there is destined for transmission on BBC Radio 3 so it is usually in 16-bit, 44.1 stereo. Multitrack recording is on a Pyramix DAW but with SADiE also available. Another part of the Philharmonic set-up is an edit area featuring a Studer OnAir 2500 sub-mixer networked to the Vista 9. Monitoring in the main Philharmonic control room is on Geithain loudspeakers, which are favoured for specialist music balancing.

While the Philharmonic studio is primarily intended for music recording and rehearsals, it has been fitted with eight HD camera wall boxes so that performances can also be broadcast visually. Camera feeds are carried on a single mode fibre connection to the TV studios vision galleries.

The next installment in this series on MCUK will look at video post-production, the network server system and other broadcast facilities.