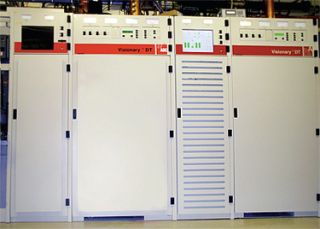 In 2000, WTVS purchased its original Axcera Visionary transmitter, an HP25SDW single-tube IOT unit, equipped with a dual-tube RF system. The transmitter has operated at a power output of 16.1 kW for the past decade without any significant downtime. When the time came to increase power, it made sense to add a second IOT amplifier to this existing transmitter system and to take the opportunity to update the transmitter with Axcera's current feature set and functionality. The company offered a comprehensive upgrade package that included a second amplifier cabinet to increase output power, along with Axcera's new ATSC Mobile DTV-capable Axciter exciters to replace the older DT2B analog units, e2v D2100 "plug-in" style IOTs and cavities to replace the original equipment e2v 8505 "build-up" style tubes and cavities. We also added Axcera's current production control system as part of the makeover/power increase project.

The second IOT cabinet, along with a new exciter/driver/controller, was installed next to the existing Axcera transmitter cabinets. We also added a redundant transmitter cooling system.

An Axcera transmitter installation team was brought on site to take care of the expansion work and make the RF system connections. The team was very efficient and the work went quickly, resulting in only a minimal amount of lost airtime. When everything was ready, the new configuration was powered up and brought on line. Our new power output was set at 48.3 kW, and we began proof of performance testing. The enhanced transmitter configuration passed with flying colors, and is now providing us with the video delivery quality that Axcera is famous for.

This new equipment package made it possible to increase our effective radiated power and upgrade our transmission plant to the latest generation technology. In its current configuration, we're confident that the Visionary package will continue to serve us well into the future.

Axcera has provided an excellent level of support to Detroit Public TV since the original transmitter was installed a decade ago. Our initial Visionary transmitter package has been an excellent performer and we expect the same results from the new Axcera equipment.

Helge Blucher has served as VP of engineering and technology for Detroit Public Television's WTVS since 1998. He may be contacted athblucher@dptv.org.