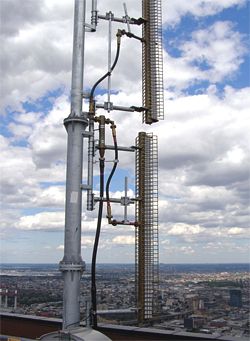 The new Trump Tower Jampro antenna installation
MELVILLE, N.Y.—They say if you can make it in New York you can make it anywhere. Our station is a good example of that. Since our founding in 1985, we've constantly worked to improve the quality of our signal and coverage area.

WLNY-TV is a Class A independent station licensed to Riverhead, N.Y., with studios in nearby Melville and our primary transmitter located in Ridge, N.Y. We serve all of Long Island, and portions of Queens, Brooklyn, the Bronx and southern Connecticut.

Even though we had good cable carriage of our signal, our off-air signal only touched parts of Brooklyn and Queens, and never really made it cleanly into Manhattan and Staten Island.

Last year we established WLNY-CD, a separate, independent Class A station in Manhattan. It carries similar programming to that of WLNY-TV, with additional local content. In setting this operation up, we essentially moved our transmission site to Manhattan to provide better coverage to our target audiences.

Setting up a new television transmitting facility in Manhattan is really fraught with challenges, as this is probably the most congested place in the world in terms of RF.

To accomplish what we wanted, we had to find a new frequency, find the right location for the transmitter and antenna, and then produce a coverage pattern that met our goals.

After the frequency search and channel allocation, things began falling into place. We located an ideal transmission site—atop the 90-story Trump World Tower at United Nations Plaza, one of the tallest buildings in the city.

The next item on the list was securing an antenna with a custom coverage pattern. Fortunately, we had a good relationship with the Jampro antenna folks, dating back to 2004 when we first started looking into transitioning to digital broadcasting.

We had been well satisfied with that company's capabilities and its adaptability in working with customers on custom antenna designs, and decided to call on them again about the antenna we needed for this new project. The frequency that we were assigned was adjacent to an existing station located to the north, and we knew that we would have to shape our coverage pattern to protect the other broadcaster.

A SIGNAL JUST WHERE IT'S NEEDED

To obtain the coverage we wanted, Jampro extended the top six bays four-and-a-half inches out over the bottom six bays. This provided a signal null exactly where we desired it.

The Jampro design gave us exactly what we wanted—a pattern that pushes our signal out to the south and west, and put a null to the north to protect the adjacent channel station.

Working with the real pros at Jampro on a project such as this was very satisfying and I'm hoping that we will have an opportunity to work with them again one of these days.

Richard Mulliner has been director of engineering at WLNY-TV for the past 10 years. He may be contacted at mullinerr@wlnytv.com.