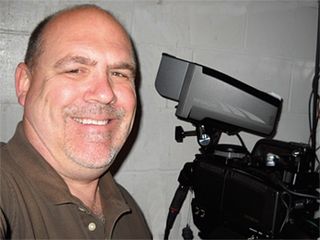 Terry Beacham
SPRINGFIELD, MASS.—This month WGGB-TV will launch live local HDTV newscasts on our ABC and Fox DTV channels, completing a high-definition transition project that's been underway for the past year. John Gormally, the station's current owner, purchased it from Sinclair Broadcasting in 2007 and began to work toward his goal of creating an HD local news operation.

To accomplish this, many technical infrastructure upgrades have been made at the station, including the installation of three new Hitachi Z-HD5000 studio cameras equipped with Fujinon XA20sx8.5BRM ENG-style lenses, as well as Hitachi VF-HD500 viewfinders and CU-HD1000 camera control units.

Our new camera equipment order also included two Hitachi HV-HD30 HD box cameras. One of these units has been wall-mounted in a fixed position to cover our high-definition chroma-key weather set, while the other has also been wall-mounted on a pan/tilt/zoom remotely controlled head in the station's newsroom to serve as a "flash-cam" for getting fast breaking stories on the air at a moment's notice.

Before making the decision to purchase these Hitachi HD cameras we did a lot of side-by-side comparisons with another leading HD camera manufacturer's product. We also performed some rather extensive in-studio testing of the new cameras and found that the picture quality from the Hitachi units exceeded all of our expectations. The feature sets and overall capabilities available from the Hitachi cameras made them an excellent buy for the money, keeping us within our new camera budget. Another important factor in our decision to go with Hitachi was that the company could meet our delivery schedule, allowing us to maintain our timetable for the high-definition rebuilding project.

As we are an independently-owned station, we have the freedom to pick and choose equipment tailored to our specific needs and budget, so we were not locked into a "group" decision when it came time to purchase our new HD gear.

Our project also included the creation of a new production control room that's equipped with a 2.5 M/E switcher, a dual-channel live graphics system, and a digital audio console. All of these production elements are tied to a video file server for maximum operational efficiency and convenience.

Our local news operation stays quite busy, as we produce early and late evening newscasts for both our ABC and Fox outlets, and also do a half-hour noontime newscast. The new Hitachi cameras, of course, play a large role in making this local news production possible. We know that the Hitachi Z-HD5000's will be workhorse cameras for years to come and are confident that we've made a wise choice in acquiring them as part of our complete move into the world of high-definition broadcasting.

Terry Beacham is director of engineering at WGGB-TV and has been with the station for two-and-a-half years, and has been involved in television broadcasting since 1980. He may be contacted at tbeacham@wggb.com.