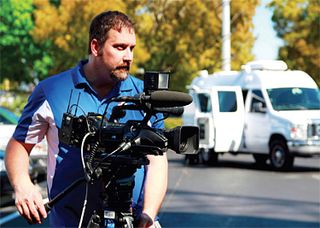 FORT MYERS, FLA.: Waterman Broadcasting recently transitioned our Florida-based stations to high-definition ENG operations with the acquisition of 21 JVC GY-HM790 ProHD cameras. Waterman owns WBBH-TV, an NBC affiliate, and also has an LMA with ABC affiliate WZVN-TV, which is owned by Montclair Communications. These stations serve the Fort Myers/Naples market and operate from the same facility. While some footage is shared between newscasts, each station has its own studio and news crews.

Chief photographer Todd Ofenbeck shows off one of Waterman Broadcasting’s new JVC GY-HM 790 ProHD cameras The road to high-definition video production has been a gradual progression for both operations. We upgraded the news studios of both stations for HD in 2007 with JVC GY-HD250 cameras, but held off making the switch to high-definition in the field. The cameras we were using at the time could provide SD footage in 16:9, but of course the video was much softer that what we were offering viewers with our high-definition studio shots.

We finally made the switch to HD ENG last June, and the decision to go with JVC cameras wasn't a difficult one. We'd had great service from other JVC products we've owned, and this, coupled with the price point and the performance the JVC GY-HM790 ProHD camera delivered, made the decision all that much easier.

We've been using a file-based workflow for a long time; however, our SD ENG cameras captured on proprietary media. This was another part of the equation that the ProHD addressed, as it records on easily obtainable and inexpensive SDHC cards, not the large and proprietary units we'd been using. The SDHC cards work great, our people all like them a lot, and they cost significantly less than the storage media that we'd been using.

The ProHD cameras deliver ready-to-edit video files for our Edius NLE systems so news teams can take advantage of JVC's native file recording workflow. Before we began using the new cameras, we upgraded our Edius systems to Edius 6, which gives us full 64-bit functionality and no issues with our ENG footage.

GY-HM790S FOR THE STUDIO TOO

As part of our transition to full HD, we also purchased nine additional GY-HM790 cameras for upgrading our studio operations. There are four cameras in the WBBH studio and five in the WZVN studio. We've been very happy with our GY-HD250s, but the more advanced GY-HM790s deliver even better color and resolution. It seemed prudent to make sure our studio live shots looked as good as our ENG footage.

We also purchased six of JVC's compact GY-HM100 ProHD camcorders for one-man ENG use. For most assignments, we send out talent and a photographer, but some of the simpler stories can be easily covered with a handheld camcorder. The GY-HM100 delivers great shots, uses the same SDHC cards as the GY-HM790, and provides the same ProHD workflow.

Our GY-HM790s in the field are equipped with Fujinon 17x HD lenses, and our photographers get great results. There are much more expensive camera options out there, but we really like these new cameras. For the money, you just can't beat JVC's picture quality and workflow.

Dan Billings is the director of technical services for Waterman Broadcasting. He may be contacted at danb@water.net.