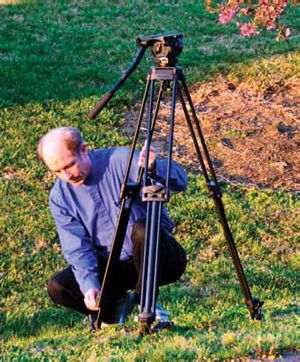 The author prepares the Vinten Vision Blue 5 for a nature shoot.

Vinten is a well-known manufacturer of tripods and pan-and-tilt heads, with a reputation for high-quality products. The range of camera support systems that the company builds is remarkable, from lightweight systems for field use with small cameras, to heavy remote-controlled studio systems that move around automatically by computer command.

I received for evauation the company’s new Vision Blue 5 pan-and-tilt head, coupled with a model 3819-3 75 mm twostage aluminum tripod. It is an elegant and lightweight system that uses a new Vinten development called “Perfect Balance.”

FEATURES
The big new thing here is the Vinten Vision Blue 5 fluid pan-and-tilt head, so I will spend some time describing it. The Vision Blue 5 is for medium-sized cameras, with a capacity ranging from 12 to 26.5 pounds.

The Vision Blue 5 has the usual controls for pan-and-tilt drag. These controls are infinitely adjustable instead of having discrete amounts of drag dialed in.

Where a more basic product might have settings of 1-2-3-4 and so forth, the Vision Blue 5 has adjustments that you can set to somewhere between two and three (for example), if that’s what works best for you.

In addition to infinitely adjustable panand- tilt drag, the Vision Blue 5 camera head has a sliding quick-disconnect plate that is used to balance the weight on top of the head. Vinten suggests balancing the weight so that it just starts to tilt down, then adjusting the head’s “Perfect Balance” counterbalance control so that the head’s payload can be tilted at any angle and remain in that position without the user needing to adjust the tilt drag or lock.

This Perfect Balance feature is what is really new with the Vision Blue 5. With the camera properly balanced and the Perfect Balance control dialed in properly, you can tilt the camera through a 180-degree arc and have it stay in whatever position you leave it. All with the drag controls adjusted for your preference and without using the tilt lock.

The Vision Blue 5 head came with a lightweight pan arm that can be attached on either side of the head. The only other thing included with the pan-and-tilt head was a sheet of instructions on how to properly adjust the Perfect Balance feature.

The model 3819-3 tripod is made from aluminum and has a floor spreader. The tripod has two stages, with a minimum height of 28 inches to the pan-andtilt head’s top platform and a maximum height of 66.5 inches. The stages are locked in place with triangular knobs that Vinten calls “Pozi-Loc” leg clamps.

The floor spreader is fastened with strong rubber loops that double as feet for the tripod. When you remove the loops and take the spreader off, it exposes steel spikes on the bottom of the tripod for use on soft surfaces.

The Vision Blue 5 head and 3819-3 tripod arrived in a sturdy and padded cloth bag, suitable for shipping as baggage or just tossing into the trunk of a car.

IN USE
The Vinten Vision Blue 5 and 3819-3 head seemed a perfect combination to me. I should note however, that although the components look relatively small and the entire system is reasonably lightweight, this setup requires a camera with some heft in order to get the Perfect Balance counterbalance adjustment dialed in properly. I found out that you really do need a camera/equipment payload that weighs at least 10 pounds to set the pan-and-tilt head up properly.

With its ball mount and heavy leveling knob, it’s easy to get the head level. Vinten says that the cool blue light on the bubble level enhances the viewability of the indication in both darkness and daylight.

Once set up and leveled, I used the sliding quick-disconnect plate to balance the camera as Vinten recommends, then set the Perfect Balance counterbalance adjustment. With the tilt drag setting where I liked it, the tilt stayed wherever I put it—in fact, it could be tilted straight up or down, and stayed in place without any backlash or drift. I did observe that the Perfect Balance knob was stiff at the ends of its range, which was the only downside to its function.

Everything about the Vision Blue 5 whispered “high-quality,” including the silky pan-and-tilt drag controls. Lesser panand- tilt heads click into definite settings for pan-and-tilt drag; then there is a lurch as the head finds the new settings. The Vision Blue 5 operation was simply smooth wherever I set it, and the only thing that changed was the amount of drag. I have to admit that it was a really classy performance, if such a thing can be said about a pan-and-tilt head.

I decided to take the Vision Blue 5 and 3819-3 combination to a nearby park to get some shots of spring flowers and associated wildlife. With a combined weight of around 13 pounds, the system was easy to carry the half-mile or so I needed to the park.

Once set up, I panned smoothly to follow insects and birds as they visited flowers. Much of this was at maximum zoom, and the Vinten system kept the shots steady and smooth. There was no backlash or twisting torque from pans with this combination—everything was steady and smooth.

Some of the birds returned to a large bird house, where they hopped around seemingly at random. Although the bird house was above my position, the counterbalance feature of the Vision Blue 5 head let me set the drag controls for fairly light settings and once again the system held the tilt without drifting. That’s a great feature to have for keeping a camera on unpredictable wildlife.

The 3819-3 tripod that Vinten supplied worked well with the Vision Blue 5 head. The two-stage legs can be locked at any height, so setting up for shooting on an inclined surface should never be an issue. The bottom locking knob on each leg is close to the rubber locking loop for the spreader, so working that knob with my fat fingers was just a bit tricky to accomplish.

Vinten says that the Vision Blue 5 panand- tilt head will work over a significant range of temperatures. However, I couldn’t confirm that, as I had it for only a few days and the weather was fine at that time. However, I was impressed with its features and overall level of quality.

SUMMARY
Vinten’s Perfect Balance feature is new to me and I was really impressed at how it will hold a camera in exactly the position you want it to be. Normally, I tilt my camera and then dial in just enough tilt lock to hold the camera in that position, which then means that I have to fight the lock a bit when I inevitably have to move the camera.

The Vision Blue 5 eliminates that annoying pan-and-tilt head problem, something that will be a major selling point for many shooters. And let’s not forget the Vinten 3819-3 tripod, which is a pretty fine set of sticks. I was a little sad to see this system go back to Vinten, but such is the lot of the reviewer.

Bob Kovacs is a video engineer and video producer/director. He may be contacted atbob@bobkovacs.com.