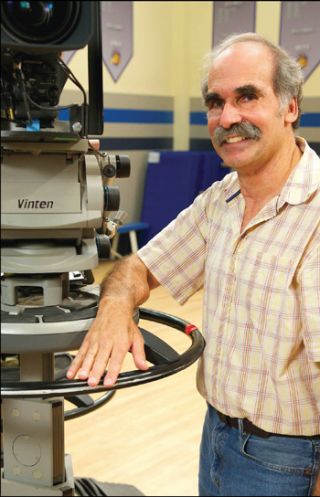 HOLLYWOOD— Several years ago I made the move from single camera dramas to multicamera comedy and quickly learned that in this format there is no margin for error, especially when you‘re shooting in front of a live audience. That’s when my crew introduced me to Vinten heads and pedestals.

Currently, I’m shooting “Jesse,” a Disney Channel series aimed at the youth market. It’s the story of a young woman who travels to New York from Texas to become a star. Low on funds, she becomes a nanny to four kids. The show offers positive social messages about family life with plenty of kid-friendly, gag-style humor mixed in.

Rick Gunter We shoot the series on stage at Hollywood Center Studios using four cameras which are supported by Vinten Vector heads on Vinten Quattro studio pedestals. I would never attempt to do a multicamera show without this setup.

KEEPS PRODUCTION MOVING
My crew members are the best and are always up to any challenge the directors might throw at us. As we’re using Vinten heads, rebalancing the camera to compensate for a lens change or adding an extra light never slows any of them down.

The Vinten heads we’re using on “Jesse” have a full range of adjustments and work effortlessly with a wide range of cameras. All of the operators tell me that heads have a really natural and transparent “feel” to them. I rarely see any other type heads used on the sets around here anymore. On this show we do an incredible amount of setups during the shooting day and we’ve found that the Vinten heads always hold up to the challenge.

Some of the scenes on “Jesse” require inserts to punctuate the scene. With other manufacturers’ heads, we’d have to loosen a bolt to get the maximum tilt range from the head. The problem with making such adjustments is the time that it takes to make the adjustment, and after loosening the bolts, the heads have to be leveled up again. However, with the Vinten heads we’re using in the production of “Jesse,” we’re able to shoot a scene and perform extreme camera tilts whenever needed without stopping down for adjustments and rebalancing.

NO SLIPPAGE HERE
We also do green screen insert shots about once a week. The storyline involves one of the character’s pet lizard and since we can’t work with this lizard around any of the young cast, we shoot him separately and place the sequence in the shot using a green screen.

Often, we have to leave the Vinten setup in position for several hours before we can complete this sequence. It never drops or moves in any way. The locks are superb and we never fear camera movement during this time. It’s been my experience that when other heads are left this long, they have to be wedged or sand-bagged to keep them in place. However, the Vinten heads with their innovative locking system always stay exactly where we leave them.

Vinten heads and pedestals save us time and allow us to achieve great shots that make the scene come alive.

Rick Gunter has shot more than 650 episodes of single camera and multicamera series and was nominated for an Emmy in 2011 for an episode of “Wizards of Waverly Place.” He may be contacted atrgunter105@aol.com.