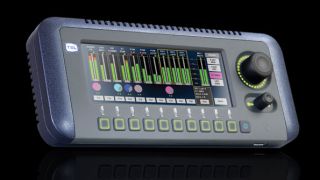 This working model is still in play but offers inherent limitations, including inefficient use of rack space, limited channel count, slow access to multiple signals and reliance on a larger staff to handle the equipment. It is also chained to a particular rack of equipment, or spread through multiple locations that might not be ideally situated for an application.

With the industry’s move into digital production, critical audio material is now embedded in an SDI datastream, making the existing method of monitoring audio streams not only outdated, but woefully lacking in capacity and flexibility. Although systems designers address this situation through a creative blend of diverse equipment from different manufacturers, solving this ubiquitous problem is of paramount importance. In an era where production staff and valuable rack space are limited commodities, the industry is in dire need of a dedicated system to tame audio signal monitoring.

A broadcasting company approached TSL Professional Products with just such a conundrum. It wanted to solve its monitoring problem through an integrated approach that covered all the audio bases in one unit. This request led to TSL’s development of the AVM-T-MIX (Touchmix) system. Essentially a rack-mount monitoring unit with integrated touchscreen display, it can de-embed audio from one or two SDI signals simultaneously and mix the demuxed audio with AES and analog signals from various sources. Individual levels are controllable, along with balance and pan adjustments for stereo or mono signals, for each source onto the monitoring output.

With Touchmix bringing all the audio streams together, TSL felt the time was right to introduce a remote touchscreen controller to accompany the system. Thus, the TSL Touchmix Pilot was born, and audio monitoring made its screen debut.

The new audio monitor places two full-featured audio mixing consoles in front of an operator who can access and process audio via touchscreen in a location convenient to him or her. Because the screen is connected via Ethernet, it can be located anywhere it’s needed — in a facility, truck or remotely via the Internet — allowing a creative team in the main studio to monitor signals for a field operation, for example.

Importantly, embedded audio for up to two SDI streams can be de-embedded and processed with any other audio format, thereby eliminating the need to wire in an external de-embedding system.

The input section on the main rack-mount processor offers single (or optional dual-2SD only) auto-sensing; 1080p at 60Hz, 59Hz, 94Hz and 50Hz; and an HD/SDI video input, with de-embedded audio monitoring from up to 16 channels for SDI signal one and eight channels from SDI signal two, group one and two only. Eight AES (eight pairs/16 channels) or four AES (four pairs/eight channels — 2SD only) inputs are available at 110Ω balanced or 75Ω unbalanced via optional CAB-D25-BNC cable. Eight analog stereo inputs are also available. This inherent flexibility covers a wide variety of production situations.

With operational simplicity as the goal, the input channels in mixer one can be set to work with the format of the incoming audio necessary for a particular production. This audio might be a mono analog signal, combined with the left side of a digital stereo signal and mixed with a full 5.1 surround stream that an engineer might want to control and output as a stereo downmix to a headphone. Simply by touching the screen, access to the pre-configured incoming signals (which are labeled at the top of each bar graph) is accomplished. In this section, operators can adjust the signal’s level, pan and balance. The right-hand side of the screen allows operators to define the output signal as mono, stereo or 5.1 surround.

For example, a production team for a sports event in New York might be dealing with audio feeds coming in from many sources from within a facility, as well as external sources. The program feed might be in 5.1 surround, with multiple commentators from around the country sending in complete video feeds from a production studio, or mono audio via the Internet or smartphone. Or, talent might be in a studio in Arlington, VA, while giving live commentary on a baseball game in New York.

The audio monitor gives the team a way to instantly gather and hear all the audio components, including comms. This audio helps the creative team decide on camera shots and cutaways to the stadium or studio.

With the audio system, the commentator can set up his or her own headphone feed, which might include onsite program audio, the director from the stadium broadcast facility, the interviewer in New York and the local director for a custom head-phone mix. Configuration snapshots, whether simple or complex, can be loaded or saved instantly using onboard memory locations or via the onboard USB port in situations where different programs or events (e.g. London 2012) have different audio monitoring requirements.

The monitoring system effectively combines audio signals from anywhere in the production chain into one unit. This has the effect of reducing the need for comms panels, external mixers and de-embedder systems, thus reducing costs and saving on space.

In keeping with the trend toward working with reduced staff, the integrated monitor brings streamlined “leanback” audio monitoring operations to the wider creative team through an easy-to-use, intuitive interface. It works well in demanding, high-level broadcast facilities, as well as in smaller production studios and remote vehicles. Audio monitoring has finally made its screen debut.

—Martin Dyster is head of audio at TSL Professional Products.