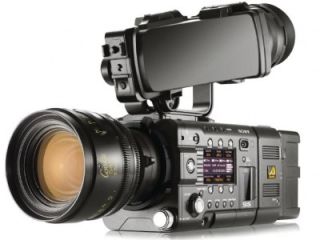 For the past two years, Sony has floated the tagline “Beyond HD” to hint at the future migration path for its high-resolution camera customers. The cover has now come off, and the plan for cameras that can capture video as data in true 4K, 6K and even 8K resolutions is as sharp as the images they produce.

As part of this master plan, Sony announced two new 4K cameras, set to be available in February 2013, that offer sleek, modular ergonomics and the ability to produce pictures heretofore only possible with its high-end F65 camera. The new PMW-F55 and PMW-F5 cameras are designed to fill in the void between the F65 and the lower-end F3 handheld camcorder, which has found numerous users among the television episodic and commercial production.

Since at least 2010 (and clearly prior to that), Sony has been secretly improving upon on a new 35mm CMOS sensor that is capable of 8K resolution image capture, but heretofore has only been enabled for HD, 2K and 4K production. The higher-end F55 and F5 models feature newly developed PL lenses, RAW recorder, a new choice of viewfinders and a new recording media with expanded capacity to accommodate the data-hungry storage needs of high-resolution RAW image files.

“We knew we needed a stronger product offering in the mid to high range of users, who need a fully working high-resolution camera system that is easy to maneuver and control, yet is practical and price competitive” said Tatsuro Kurachi, direct of product marketing and management for Sony’s Professional Solutions of America division. “Sony's answer is so much more than a slight improvement in image acquisition. It’s a full rethinking of the digital cinematography and television production space. What we’re proposing is the next step in image acquisition that takes into account workflow and archiving of this high-resolution material.”

Using the new RAW recorder “AXS-R5” in high-frame-rate mode allows shooters to capture super-slow-motion imagery in up to 4K RAW files on newly developed AXS memory (up to 240fps) with the F55; and up to 120 fps with the F5. The F55 adds a global shutter to eliminate rolling shutter skew and flash band, delivering the same color filter with ultrawide color gamut as the F65 for true color reproduction. The cameras are further distinguished by wide (14 stops) exposure latitude, high sensitivity and low noise.

In tandem with the new cameras, Sony is also unveiling the AXSM Access Memory System for 2K/4K RAW recording. It includes a new AXSM memory card (512GB capacity), using the generic file system exFAT. Users can record 4K RAW data up to 60fps and 2K RAW up to 240fps, with a 300MB/s sustained transfer speed. PC-friendly operation is enabled through use of the AXS-CR1 card reader, offering a USB 3.0 interface for high-speed transfer. Additionally, the new AXS-R5 RAW recorder directly docks onto the F5 and F55, for a compact recording system for 2K and 4K RAW recording.

The cameras support Sony’s new high-speed, enhanced versions of its SxS PRO memory cards: the SxS PRO+ series (in 128GB and 64GB capacities, models SBP-128B and SBP- 64B). Based on the memory card technology widely used in Sony’s XDCAM EX camcorders, the new cards support XAVC 4K and XAVC HD high-frame-rate recording, and can be directly inserted into the cameras.

The 8K F65 continues to evolve, with new features designed to keep it at the high end of imaging. These features include a new high-frame-rate mode for 4K RAW recording at 120P to deliver stunning 4K images with super-smooth slow-motion capabilities and the SR codec updated to 12-bit. Future updates to the F65 will include 6K de-mosaicing, among other features.