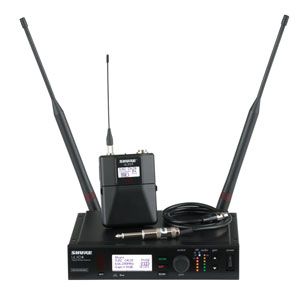 Searching for open channels can be a real problem, but finding a cost-effective wireless microphone system is, fortunately, getting easier. The Shure ULX-D Digital Wireless package offers outstanding audio quality and a robust structure. This system comes with either a lavalier microphone or a wireless version of the classic SM58. We reviewed the lavalier package.

A maximum of 14 ULX-D systems can operate out of a single 6MHz TV channel.

The front of the unit is uncluttered. Although the ULX-D is small, its sync, scan and edit controls are easy to access. Also, the LED screen is ample enough to be programmed in any environment. Brightness and contrast controls allow for personal display settings.

Navigating through the menus is easy. A clipping LED monitor is included, as well as gain controls that allow adjustment of the unit’s output level. With golden ears, you won’t need it, but the LCD panel displays the message “Tx OVERLOAD” when things get dicey on the input side.

The back of the device sports a pair of antenna inputs and both 1/4in and XLR line outputs. The mic/line switch lets you apply a 30dB pad if using the XLR output. An Ethernet port is included in case a router and network multiple units need to be hooked up together.

The transmitter is sturdy. Flipping open the top reveals exit and enter buttons. After dialing in the appropriate channel, you’ll probably want to scroll down to the UTILITY function and lock in the settings to make sure that talent doesn’t mess things up.

Setting gain structure is always crucial. As mentioned, the receiver sports up and down arrows that control output as well as a 30dB pad if you’re communicating with your mixer via XLR connections. I prefer to use gain controls and hit a pad only when necessary. But, I was able to establish a clean audio path both ways. Of course, you’re not going to record Kenny Chesney’s next single with a lav mic, but the system’s quality was excellent for its intended purposes. The product’s manual says that the ULX-D operates on a 24-bit/48kHz digital pathway, and I’ll take them at their word.

Bandwidth may not be a problem if you’re working in central Alaska, but it is most other places. That said, a maximum of 14 ULX-D systems can operate out of a single 6MHz TV channel. So take that, Manhattan!

I didn’t need that much room when I took this demo unit to Scotty’s pub in Short Hills, NJ, for former New York Knicks ballboy Lewis Dorf’s 60th birthday party. Lew asked if I had a mic and amplifier to use, so I took the ULX-D out for a test drive, along with an old Peavey practice amplifier I had lying in my studio. It worked like a charm as the guests who had prepared remarks traded the lav mic and transmitter and showered Lew with accolades and a few digs. In other words, the quality of the audio in this live situation was excellent.

Great audio specs and the ability to gang multiple units together makes the ULX-D Digital Wireless System a worthy entrant in the wireless microphone marketplace.

—Gary Eskow is a composer, journalist and project studio owner. He also is the writer of Broadcast Engineering’s “Audio Technology Update” newsletter.