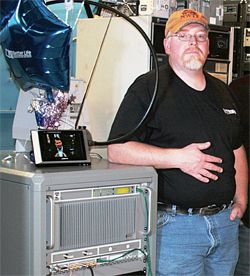 William Whitt
GRANTS PASS, ORE.—Better Life Television is a viewer-supported non-profit outreach organization of the Seventh-day Adventist Church. Our station group comprises a mixture of full and low power operations—23 in all—located in Oregon, Washington and California. This involves a lot of transmission gear.

My involvement with Screen Service transmitter products goes back to 1999, and along the way I've found out that they're very reliable and can withstand some really challenging environments.

NOT QUITE WHAT WE WANTED

When we brought our full power station, through the original digital transition in February 2009, we decided to try out another manufacturer's digital transmitter product. Unfortunately, things didn't go quite as we had planned. We began converting our other facilities for digital operations soon after the full power transition and quickly began running into coverage issues. We also found that we were unable to meet the manufacturer's AC power requirements at some of our more remote transmitter locations.

I went back to Screen Service and had a look at their new product line. What I found was real attention to detail in terms of what a broadcaster needs. Most of my low power licenses fall in the 40 to 60 Watt range, and Screen Service's 100 Watt SDT-201 digital model covers every one of these, and measures a mere 19 inches deep, while occupying only a 2RU space.

We also found that the digital signal these transmitters produced was rock solid—no drifting. We're getting fantastic MER values at the headends of the cable companies we work with. Also, the transmitter GUI interface describes "software-defined transmitters" to a "T." I can fully adjust the output power of the transmitter in 1 Watt increments, download events, clear alarms, monitor power supplies, and even place a unit in standby mode if I want to. All this is possible from my desk via TCP/IP—something that otherwise could require an eight hour drive to reach some of the sites.

The frequency agility feature also scores some high marks around here. With just a little setup time, I can put the SDT-201 on any of our licensed channels, which really is helpful in reducing my backup equipment costs, and allows me to keep a spare 100 Watt transmitter on the shelf, ready to dispatch to any of my sites should it be needed.

The small profile of the Screen Services SDT-201 is also a big plus for an operation with remote (and sometimes barely accessible) transmitter sites. Just a few years ago who would have thought that you would someday be able to stuff a 100 Watt television transmitter into a backpack and walk it to a transmitter shack on a remote mountaintop. This has really been a lifesaver during the winter and the limited amount of daylight at that time of the year. Being able to get in, quickly swap out a defective transmitter, and get out without having to perform part of this in the dark provides a much higher level of personal safety.

The 100 Watters aren't the only Screen Service products we've tried out. Our last full power transition involved a Screen Service transmitter, and we've found that it's just as dependable and feature-packed as the smaller models.

William Whitt has been chief engineer for the Better Life Television group for four years. He may be contacted at billw@betterlifetv.tv.

For additional information, contact Screen Services at 212-695-8378 or visit www.screenservice.net.