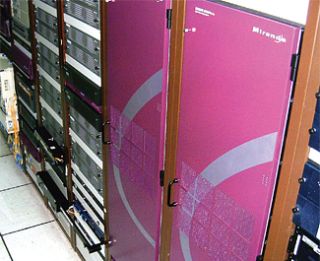 The Miranda router installation at Televisa Chapultepec
MEXICO CITY
A new router was undoubtedly the most critical piece of equipment needed for our existing and future HD requirements. Not only does it sit at the heart of all our operations, but it also must be considered as a long-term investment. A router is something that needs to stand the test of time, although the longevity of equipment can be very difficult to predict in the current climate, as new HD and 3D formats are still evolving.

Our Chapultepec facility has a large production center for sports, variety and news programming. We also perform transmission and playout of Televisa's three network channels, including cable, satellite and DTH outputs. When you add in a local channel from Chapultepec and content production for Sky and Cablevision channels, we're transmitting 34 channels.

With this number of signals, redundancy is obviously a very high priority and this led to our decision to install a Miranda Nvision Enterprise Class router, as it offers an "N-on-1" crosspoint redundancy. If a failure should occur, all of our outputs can be "gang-switched" to a redundant crosspoint card during the next vertical interval. However, I'm pleased to say that we haven't had to test this feature since the router was installed last February. We have used other Nvision Compact routers in our facility, and have been impressed with their reliability.

To minimize the initial costs and simplify the migration to the new router, we desired a phased transition to the 3 Gbps/HD system. We had some 160 Jupiter control panels in the plant and were assured by Miranda that the new router could be operated under Jupiter protocol. These panels will be replaced with Nvision panels later this year for increased flexibility.

Another key router requirement was the ability for handling fiber optic and traditional signal paths simultaneously. Miranda's Nvision 8500 routers can be fitted with fiber interfacing, allowing easy mixing of fiber and coax within the same frame.

Our facility planning has been helped by the easy scaling of the router. All that we have to do to expand up to the 1152x1152 configuration is add a second 32RU frame and some plug-in modules. This is a much better use of space than the typical, four-frame routers in this size range.

Although we're not transmitting 3D at the moment, we've recently started to experiment with it, making the Nvision's 3D capability increasingly more important.

While the quality of equipment is king, the competitive pricing and the support we've had from the Miranda team has also been excellent.

We have had absolutely no problems with the router so far. It performs very well, and it's very stable. Even under the strain of the FIFA World Cup coverage, it has performed perfectly, and we're very confident that it will continue to do so for a very long time.

Antonio Pirronis is director of engineering at Televisa Chapultepec and has been with the organization for the past 33 years. He may be contacted atapirron@televisa.com.mx