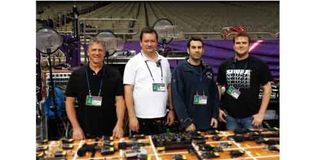 For the company’s 17th-consecutive Super Bowl, PWS again partnered with ATK Audiotek and Versacom for the big game.

PWS project manager Jason Eskew and his team began their work almost five months prior to the game.

“I did a site survey at the Superdome in October and submitted our frequencies in November for approval,” said Eskew. “When doing so, I had to be sure to pick equipment that covers multiple manufacturers’ frequency ranges. Each performer has his or her equipment of choice, along with endorsement deals that require us to use a specific wireless system, so we needed to be able to easily adapt to this, along with any changes the scheduled performers might make on site.”

PWS utilized the Shure Axient Wireless, UHF-Rs and PSM-1000 series IEMs. In addition, the team employed 3732 receivers with 5200 transmitters, as well as a range of wireless gear from Sennheiser. The Axient system was able to provide automatic fail-over protection for the referees’ microphones when it was in the body pack diversity mode. Versacom provided wireless intercoms, including HME PRO850 and BTR800s from Telex.

PWS utilized its Domed Helical Antenna on the field. This antenna combines circular polarization configuration with the unit sealed within a new compact design constructed from rugged polycarbonate, providing robust and uncompromised multichannel wireless microphone, in-ear and intercom wireless connectivity. A combination of Domed Helicals and original PWS Helicals were used for the ATK wireless systems on the field.

PWS’ crew, consisting of Eskew, John Garrido and Brooks Schroeder, was onsite to monitor the RF signal usage and to troubleshoot.

“When faced with the clutter of several hundred frequencies in use, it is our job to stay on top of it and be ready with backup frequencies and equipment,” adds Eskew. “This year’s Super Bowl was bigger than ever, and the crew at PWS once again did an incredible job making sure that the pre-game festivities, including the national anthem, ‘America the Beautiful’ and the incredible half-time show featuring Beyoncé, went off without any fumbles, even with the power outage. Thanks to our uninterruptible power supply, we were able to maintain power for the referee mics, which was still important at that time even though play was halted, until the rest of the power was restored within the Superdome.”