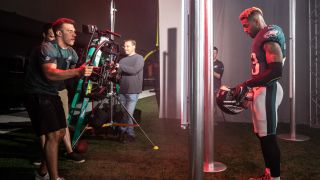 PHILADELPHIA—As senior producer for the Philadelphia Eagles, our team is responsible for everything from game footage to features to high-production value content. The Eagles have a great history of storytelling and in 2014, we began looking for cameras that could streamline what we were doing and bring that storytelling to modern cinematic life. Our work is heavily “run-and-gun” and we needed a way to be more efficient.

At the time, it was hard to match footage as we were using different cameras from a variety of brands. Luckily, with our facility being located near NFL Films in New Jersey, we were able to easily stay in the loop about new technology. This is how we discovered ARRI.

At the time, NFL Films was moving a lot of their infrastructure over to ARRI’s AMIRAs. With our content being aligned with theirs, we knew this camera would work for us as well. We purchased three AMIRAs based on customizable switches on the side, the intuitive menu and the overall look of the ARRI footage. Other cameras tend to be too menu-oriented, which makes them difficult to use during a high-paced game. These features allow us to quickly capture more slow-motion and other stylistic footage. Also, by switching to the same platform as NFL Films, we could use their footage interchangeably with ours, knowing it would match.

My favorite feature often flies under the radar—an interchangeable native lens mount on the AMIRA and ALEXA Mini. We have a large inventory of lenses in PL, B4 and EF mounts that we’ve gathered over the years. The ARRI mount system lets us utilize all of these lenses on any given shoot, with only a minute needed to swap out camera mounts.

As a department responsible for producing multiple forms of content, we need to utilize the cameras in a variety of ways. For example, our game day content is the most prominent and arguably the most important that we produce. We use all of our ARRI cameras on game day in more of a post-production capacity.

Our ALEXA Mini shoots at a high-50 (referring to the 50-yard line) angle, which covers whichever player we have wired for sound. One of our AMIRAs shoots high framerate game action as an alternative to the typical broadcast style. We use our other two AMIRAs on the ground, splitting them up as multipurpose cameras capturing stylistic game action, fan and atmosphere shots.

Outside of game day, our ARRls are our main camera for short stories or features, whether it’s local or on the road, sit-down interviews and shoulder-based handheld work with players. This allows us to use our best cameras in as many situations as possible in order to produce and maintain overall high production value.

MASTER CONTROL AT OUR FINGERS

ARRI Master Grips also help us get the most out of our cameras. These hand grips allow us to assign and control complex camera and lens features with fingertip control. In the field, if we are shoulder-mounted, it gives us so much flexibility in the moment when you’re trying to dial in multiple settings to get the shot. In our world, we do not get a lot of second chances to shoot a moment. Instead of turning the camera on its side and trying to figure out what’s what, you’ve just got it all at your fingertips.

As a content team, we strive to create the best content—simple as that. Viewers sometimes may not notice the cinematic quality we aim for, but they do recognize and appreciate when it has the same look and feel as movies or big brand commercials. The ARRls allow us to achieve that goal, while also helping us operate efficiently day in and day out.

Nick Rotondi is a senior producer with the Philadelphia Eagles. He can be contacted at NRotondi@Eagles.nfl.com.