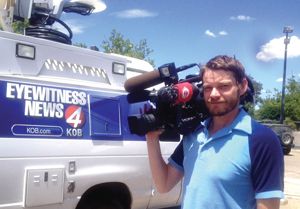 Jeremy Fine ALBUQUERQUE, N.M.—I’ve been fortunate to spend my entire career in broadcasting at KOB television, the NBC affiliate here. We’re owned by Hubbard Broadcasting and are the oldest television station in New Mexico, and the second-oldest television station between the Mississippi River and the West Coast. Our 12 photographers stay busy, as our territory includes the entire state (more than 120,000 sq. miles), as well as parts of Colorado and Arizona.

For the past two years, we’ve been shooting news with Panasonic AG-HPX370 P2 HD camcorders. In addition to the 12 cameras used in news coverage, the station has additional HPX370s in sports, promotions and engineering, for a total of 15. Our station bureaus in Farmington and Roswell shoot news with Panasonic’s AG-HPX170 P2 HD handhelds.

Typically, KOB airs five and a half hours of local news each weekday, three hours each Saturday, and an hour each Sunday. Previously, we’d captured news on digital tape, and the upgrade to solid-state P2 storage was quite a leap forward. With the arrival of the HPX370s, we also switched our news editing operation to Final Cut Pro, and are able to ingest material at twice real time.

‘NEW MEXICO TOUGH’
Our news photographers like to say that we cover “hell and a half-acre” every day, and the HPX370s have made this coverage more comfortable on our shoulders, as the cameras are lighter than we would have expected in a shoulder-mount configuration. The cameras have proven themselves to be rugged, and have performed flawlessly since day one. They’ve also proved impervious to the infamous New Mexico dust we experience on a regular basis.

The HPX370s provide us with many useful options, including HD/SD-SDI video outputs for external recording. We’ve found the scene files are pretty cool too, as they allow us to quickly switch settings without time-consuming menu adjustments. For example, when it’s cloudy, we’re likely to bring up the “Cine V” setting, which crushes the blacks, brings up the color saturation and really makes the picture pop.

KOB anticipates broadcasting its newscasts in high definition by the end of this year, and with the Panasonic HPX370s we own, we have full HD acquisition tools already in place that will enable us to produce network-quality, high-definition news presentations.

AHEAD OF THE COMPETITON
Since acquiring the cameras, we’ve done promotions in HD, and we’ve also aired several sweeps specials in high definition. Last October, we broadcast four hours of live HD programming from Albuquerque’s International Balloon Fiesta, the premier hot air balloon event held here annually. The images were stunning, and it was satisfying to stroll through the media tent and observe that the pictures on KOB’s monitor feeds far eclipsed those of the competition.

Jeremy Fine has been with KOB television for more than 10 years, and has served as the chief photographer for the past two years. He may be contacted atjfine@kob.com.