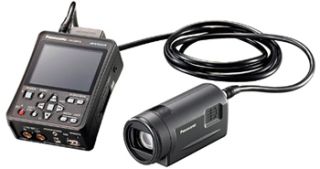 The Panasonic AG-HMR10 recorder and AG-HCK10 camera
Anyone who shoots with a full-sized 2/3-inch CCD camcorder has been in numerous situations where they'd kill to have a smaller camera. Think about trying to get the shot you need in tight quarters with a two-foot long camera package—which often occurs when you're shooting from inside a vehicle. This happened to me recently when I was trying to capture the perils of traffic in a blinding blizzard. The only way to get my shot was with the camera on my shoulder while driving under these hazardous conditions—something no one should try at home, not even a great driver/cameraperson. After this episode, I resolved to find a much smaller camera for future such assignments; ideally one which could sit on the dash and be operated safely and effectively while driving.

Panasonic's new AG-HMR10 ultra-compact handheld recorder and AG-HCK10 camera head seem to fit the bill for this and many other space-tight situations where the best solution is separating the camera head from the recorder section.

Although standalone cameras umbilicled to portable recorders were actually the norm a couple of decades ago, Panasonic's AG-HMR10/AG-HCK10 AVCCAM recorder/camera combo reinvents the double system approach to acquisition but in a much lighter package and in HD. Combined, the recorder and camera weigh less than three pounds, including an onboard 3.5-inch LCD monitor, battery and cable. The camera is slightly less than five inches in length and weighs less than one-third of a pound—only slightly larger than a lipstick cam. It slips easily into all sorts of tight spaces, and as its autofocus 12X lens focuses down to an inch or less, it can actually shoot in a space as tight as a gutter downspout.

Despite its diminutive size and price, the HCK10 is crammed with advanced capabilities and features that HD-shooting pros need and want. For starters, its three 1/4-inch 2-megapixel 3MOS imagers capture full raster 1920x1080i/60 and 720p/60 images. These are recorded exclusively in the AVCHD format, which delivers double the recording time and higher quality than the MPEG-2 compression used in HDV.

The camera also has a 12X optical zoom lens which balloons to 120X when the full 10X capacity of the digital zoom is engaged. There's also an optical image stabilizer (OIS), which is designed to compensate for motion when shooting handheld or even from a shaky tripod in telephoto mode. The HCK10 can also be tweaked to enhance skin tone detail, coring, chroma level and more.

The camera's shutter speed can be changed from 1/24th to 1/250th of a second depending on the frame rate by using the synchro scan feature. Slower shutter speeds from 1/2 to 1/30th of a second can be selected in the slow shutter mode. Dynamic range stretch (DRS) literally stretches the camera's latitude range from bright highlights to dark shadows by increasing black stretch and preventing highlights from being blown out. Iris, focus and zoom are all controlled from the HMR10 recorder.

Despite its amazing compactness, the camera has a built-in stereo microphone with automatic gain control. This can also be adjusted manually from the control panel. There's a 1/4-inch threaded socket on the camera's base for easy mounting; however, it's light enough to safely dangle by its own power cable, or it can be mounted with Velcro or gaffer's tape. It can also simply be laid flat on any horizontal surface.

The HMR10 also features several I/Os which were absent on portable decks 20 years ago. These include USB 2, HDMI and HD-SDI. The latter allows the HMR10 to double as a standalone recorder. There's also a headphone jack and a mic input.

Despite its many cutting edge features, the AG-HMR10/AG-HCK10 combo is also designed for quick and easy basic shooting with little or no training. Once the battery and SD card are loaded into the handheld recorder and the camera head is connected, this ultra-compact combo is good to go. Even with minimal advanced training I mustered some quite impressive imagery, thanks in part to the camera's nice wide angle lens coverage. When fully zoomed out, I got some really nice and natural looking shots of a friend's cats interacting with guests, and of people interacting with each other—thanks in part to the camera head's compactness and unobtrusiveness. Later, I used it as a "fly-on-the-wall" in a similar situation with good results. I also mounted it on a six-foot boom pole to get some overhead shots and keep the camera well out of view. Again, I got very positive results, due in part to the excellent picture quality starting point the camera provides. I enhanced picture quality by tweaking several parameters from the handheld recorder, with the DRS function allowing me to capture details of backlit subjects that would otherwise be lost.

I also found the pre-record function invaluable, and left it on all the time. More than once, while shooting birds and small mammals, I was amazed to have captured as much as I did, due largely to the pre-recording going on between shots. This really hit home while shooting a pair of foxes hunting in fresh snow. Without the pre-record, I would have missed much of their poetic pouncing after mice. Instead, I captured exactly what I witnessed, without losing the first few seconds as often happens when using a tape-based recorder.

Contact
Panasonic Corp. of North America | 201-348-5300 | www.panasonic.com/avccam I also tested the package with a 65-foot cable between camera and recorder, using it to capture close-ups of sparrows feeding in the snow. I mounted the camera on a mini-tripod about two feet from their feeding point, and as the temperature was barely 10 degrees above zero, I placed the recorder on a porch chair and monitored the birds through its display, recording extreme close-ups, while keeping my fingers warm. The HCK10 performed flawlessly, despite the bitter cold.

The killer app was using the HCK10 as a dashboard-cam while driving around in heavy snow. This was by far the smallest camera I'd ever tried for this, and the only one with a detached recorder. This, plus the camera's excellent image quality, allowed me to capture my best-ever storm-tracking video while driving. I was able to keep the camera more or less level on the dash, and the resulting video was both smooth and continuous. This smoothness is a powerful testament to the motion-dampening ability of Panasonic's OIS technology. It removed most of the bumps in the road during several miles of storm driving.

All of the images captured with the camera/recorder had great dynamic range and color. Also impressive was the ability to focus to within an inch or less. This allowed ultra-crisp shots of snow-draped spruce boughs, snowy dried flowers, along with some ice- and snow-glazed statues. In all cases I was definitely impressed with the overall excellent picture quality and the portability of the pair.

The AG-HMR10 recorder and AG-HCK10 camera package is really breakthrough technology. Its price point enables image capture that is difficult, if not impossible, to replicate with larger cameras. The pair provides the capabilities of Panasonic's AG-HMC40, but in two units. This is ideal for special applications, ranging from extreme high and low angle shots, tracking shots, or concealed or unobtrusive camera applications. It delivers remarkably impressive HD imagery via Panasonic's professional AVCHD (AVCCAM). This combo is ideal for special applications where larger and less mobile camera packages don't fit.

Carl Mrozek operates Eagle Eye Media, based in Buffalo, N.Y., which specializes in wildlife and outdoor subjects. His work regularly appears on CBS, PBS, The Weather Channel and other networks. Contact him ateagleye11@gmail.com.