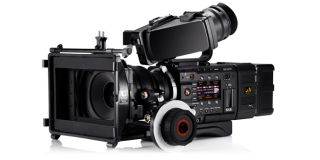 SAN DIEGO, CALIF. --Sony Electronics has just introduced two new 4K cameras that can derive HD, 2K and 4K. The PMW-F55 and PMW-F5 are designed not just for digital cinema, but also for television stations.

Juan Martinez: The PMW-F55 and PMW-F5 slot in below our F65 8K RAW camera, which is the most advanced camera in the world today. The F65 has a 20Megapixels sensor, with twice as many pixels as these two new Cine Alta cameras. From the F65 8K RAW signal, 4:4:4 4K signal at up to 120fps can be extracted. But these are 4K cameras that can deliver HD or higher, with performance above our PMW-F3 camcorder. And price-wise, they’re between the F65 and the F3.

TVT: What’s the sensor size for these two new 4K cameras?
JM: They’re 4K Super 35mm image sensors, capturing 4096 x 2160 resolution from 11.6M total pixels. The reason for using the Super 35 sensor is that it can be covered by all the lenses that are made for filmmaking. So a vast pool of professional cine lenses that are made for Super 35mm film cameras cover that sensor. Full frame sensors cannot be covered with those lenses. You’re limited to using SLR or DSLR lenses.

TVT: What about the lens mount? Is a PL mount lens?
JM: Sony developed the universal FZ mount. This mount is the native mount of these cameras. At first glance these cameras look like PL mount cameras because they have a PL mount adapter. Sony’s PL-mount adaptor incorporates contacts for both Cooke /i and ARRI Lens Data System (LDS) systems to capture lens metadata including zoom, focus, iris and depth of field. But the benefit of our mount is that you can remove that PL mount adapter, and with simple mechanical adapters, without optical elements that may introduce image degradation, you can put almost any lens on it. So you can put Nikon lenses, you can put Canon EF lenses, all of these things are possible with that mount. Other single sensor cameras have dedicated lens mounts, and people are forced to use certain lens brands, or a certain lens mount. Sony’s FZ mount gives you great flexibility. You can even use B4 lens adapters.

TVT: Do these new cameras use a Bayer pattern mask?
JM: Both cameras use a Bayer pattern mask. The F55 CFA has an ultra-wide color gamut, capturing wider color gamut (range) than film and has the same color filter array as the F65. The F55 also has a global shutter, the first global shutter on a 4K CMOS imager. The F5 has a rolling shutter along with a wide color gamma. Both are 4K, 8.9 million pixels active with a 17:9 aspect ratio.

TVT: What about recording?
JM: Both cameras feature in-camera recording to our well-established SxS card format, and will support the new SxS PRO+ memory card media. Both cameras have two SxS card slots. And as an option, there’s an external recorder, the AXS-R5 RAW recorder that docks onto the F5 and F55. It has the capability of recording 2K and 4K RAW. And even at high speed, there’s no limit to the recording time because the cameras are not recording to a buffer and then spooling off to the recorder. You can record high frame rate for as long as there’s room on the card or in the recorder, with no crop factor or loss in angle of view.

TVT: I understand the cameras can record in a number of different codecs.
JM: The beauty of these two cameras is that they can record at four different codecs, including XDCAM 50 Mb/s 4:2:2, the same format as Sony’s Professional Disc optical media. The cameras can also record internally to SxS Pro+ in the SR codec, SR light, 220 Mb/s, and with a future upgrade, 440 Mb/s RGB, which is much nicer than other codecs at that kind of bit rate, like a ProRes, or Avid Media. We’re not disparaging, but it’s just that good. We’re recording on the SxS Pro+ cards, completely file based. You can drag and drop the files. It’s compatible with Macs and PCs. So now you have cameras that are recording a tremendous amount of information, true color information. They have incredibly low aliasing, very high sensitivity.

TVT: What are some of the other features of these new single sensor cameras?
JM: These cameras can run at high speed. The F55 can run at up to 180 fps, recording XAVC to SxS Pro+ internally, and up to 240 fps externally to the AXS-R5 in 2K RAW. The F5 can run at 120 fps. And though the cameras can be used as stand-alone camcorder units, they the same control capability, through a CCU, that all the live production cameras have for television. They can be fitted with studio-style viewfinders and lenses, and integrated into multi-camera productions, with outputs for HD, up to 4K.

Rob Willox: One of the interesting things about these cameras as far as television production companies are concerned is that these are the first generation of cameras that will be able to simultaneously record 4K and HD, within the same camera system. In fact, you could produce a 4K master, a UHD master, a 2K master and an HD master, 1080 or 720. So you have a tremendous amount of flexibility available to you.

JM: I just want to mention one other thing. The typical large sensor camera, the architecture and shape of the camera is not really conducive for shoulder mount operation. But with these cameras, we like to call them "camera systems" because they have modular architecture and have many different accessories. The camera has been designed for viewfinders. We have the breakthrough DVF OLED high resolution viewfinders for the cameras, and also offer an LCD viewfinder. There are batteries and other accessories as well. But the camera is designed to go on the shoulder for ENG or docu-style, as well as to be fully dressed for digital cinematography, and hand-held operation.

RW: The business model for the F65, F55 and F5 was carefully considered for owner operators, for rental shops, all different types of productions from sports to cinematic productions. Let’s talk about the business model for the owner/operator. They want to purchase something that’s going to protect their investment for a number of years, as long as possible. They need to recoup their investment quickly so they can be profitable and make money. A lot of careful attention has gone into those concerns, both from a design standpoint and from a cost standpoint. I think we’ve really nailed it. The cost of the cameras is very efficient, as is the flexibility of the feature sets and the modularity of the design that Juan was referencing before. So our strategy is really to encompass all different types of productions, at every level, for every budget. On the television side, you would use them on a magazine show.

JM: You start working in RAW color space, with some of the things that you can do to paint and give a highly stylized look to it. Because they’re software driven rather than hardware, a lot of those tools now are accessible at any level of production. Though they can be dressed out for cine-style shooting with a larger crew, both the F55 and F5 are also ideal for one man operation, where you can start and stop the camera from the zoom control handle of the lens. So it is very comfortable, very easy to operate. You don’t need a big union crew to operate the cameras. Their size, weight, power consumption and modularity are perfect for television production. We’re aiming precisely at the one person crew, and television production, all the way up to feature film or sports and episodic TV production.

TVT: I can see where an industrial video department might want to shoot something today for internal release on the Web, but if their file footage is at the 4K level, they can later run it theater style, and who knows, as formats evolve 20 years from now, they’d have some high-quality file footage.

RW: Exactly. That was exactly the design implementation we mentioned earlier about the combination recording going to RAW in addition to going to an established codec that you can use today, instantly. And then you can either take advantage of the RAW now or shelve it for later when the client comes back and says “give me a 2K or 4K quality version of what you originally delivered to me.”

JM: That’s exactly the point of it. We’re at a transitional stage. Most of the deliverables are in high definition. And we’ve made a camera that can deliver anything that you desire. So from MPEG-2 50 Mb/s 4:2:2 high definition, all the way up to 4K RAW, and high frame rates, you something suitable for very high end compositing, or for shooting a feature film.