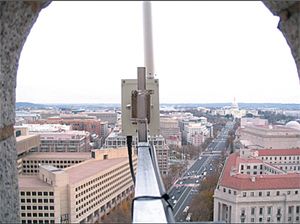 This MRC microwave radio unit was installed in the tower of Washington's Old Post Office to facilitate television coverage along the parade route.WASHINGTON
History was made on Jan. 20, 2009, when Barak Obama took the oath of office as the 44th President of the United States, and for one news organization covering the event, inauguration day was ground breaking in other ways as well.

In a first for the network, ABC News broadcast its inauguration-day events completely in high definition, which provided superior video coverage of events across a broad area—from Capitol Hill to the Lincoln memorial. In addition, a "World News Tonight" segment broadcast between the columns of the Lincoln Memorial is believed to be the first of its kind transmitted wirelessly; no cables marred the view of the Memorial or could be seen snaking their way to the nearby ENG truck.

Earlier this year, ABC deployed the MRC wireless communications equipment as part of a much larger implementation in which MRC equipment was installed at five receive sites. To cover the inauguration, the upgraded permanent system was enhanced by a temporary system to allow for additional coverage.

On the morning of the inauguration, one Link cameraback system was used at the Library of Congress to transmit the live broadcast of "Good Morning America." During the inauguration itself, special events coverage required two Link cameraback systems positioned on the National Mall to transmit footage from Capitol Hill to the Lincoln Memorial. Thanks to wireless communications technology, these cameras were able to move seamlessly across their own sectors, capturing the events in real time for live transmission.

During the inaugural parade, a fourth cameraback system followed the parade along the two-mile route from Capitol Hill to the White House. The parade itself crossed three receive sites, which relayed information to a MRC DRS4000 diversity receive system at ABC's Washington News Bureau. An additional ABC News camera broadcast from Arlington National Cemetery.

All ENG trucks were equipped with MRC MTX5000 transmitters. Additional ENG trucks were set up to retransmit ASI signals and to use multiple antennas for receiving the camera back transmissions, effectively creating an RF ASI repeater.

COVERAGE NOT POSSIBLE AT LAST INAUGURAL

Just four years ago, providing comprehensive video footage of an event of this scope simply would not have been possible—and a broadcast in high definition would have been almost unheard of—as to do so would have required multiple cameraback systems, additional receive sites and greater manpower.

The deployment of new MRC technology has minimized the amount of equipment needed in the field, and has helped make transmission in high definition possible. With high definition, the quality of the video is better than ever before, and while this can be attributed in part to the cameras used, it is MRC's wireless communications equipment that makes the transmission a reality.

Gary Nadler is general manager of the Digital and Wireless Systems division of the ABC TV Network. He may be contacted atGary.J.Nadler@abc.com.

For additional information, contact Microwave Radio Communications at 978-671-5700 or visitwww.mrcbroadcast.com.