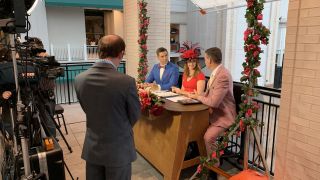 LOUISVILLE, Ky.—The newsroom at WDRB TV 41 and WBKI TV 58 in Louisville, Ky., has been getting quite a workout lately.

In a normal week, we produce more than 58 hours of live and local news. At the height of the civil rights protests in June, we were doing back-to-back coverage for five-six hours at a time with reporters embedded with protesters in the hot zones while conducting live interviews on Zoom, Skype and FaceTime.

Already, our new Strata 32 audio board from Wheatstone was easily juggling dozens of feeds at once and bouncing from one newscaster or reporter to the next—some reporting remotely—due to the pandemic.

The Wheatstone Strata 32 is our first AoIP console, purchased months prior to the events of 2020 after a Wheatstone D8 TDM routed console gave us years of service.

We didn’t make a conscious decision to go IP; we just simply decided to go with the next generation of audio mixing available. It was really a stroke of luck that we made the transition to a fully IP audio-networked board when we did.

What we liked about the board right away was that it packed a lot of capability into a compact frame. It has dedicated faders for eight subgroups and two masters along with 32 physical faders that can be layered for 64 channels, all in a 40-inch frame with a central touchscreen interface. The Strata 32 puts all the controls on the surface and uses the Gibraltar IP Mix Engine for networking, which handles digital signal processing.

Because it’s an IP audio-networked board, there are no limitations with fixed connection points on the console chassis itself. Strata 32 has access to all sources in the network and any channel can connect to any audio source or destination, using any preferred audio format at any time. Strata 32 is an AES67-compatible board, which helps make it future-proof.

Once installed, we quickly discovered the Strata 32 makes simple tasks like being able to create mix-minuses for interviews a lot easier. This board has routable mix-minus with talkback interrupt, as well as routable tracking, routable mic presets and—most important to us at the time of purchase—routable EQ, filtering, compressing/limiting and expander gate.

I’ve actually been able to get my staff to embrace dynamics processing as a result. It’s always been a challenge cutting from the sports guys, who really like to project to the point of screaming, and then going to the weather announcer, who has more of a “normal” tone of voice.

Unlike in the past when we had to train staff on voice processing techniques live on-air, with Strata 32’s IP audio networking, I can train staff on the new console offline without every mistake going directly to air. Next, I plan to establish floating presets specific to each sportscaster, newscaster and reporter that will give operators a starting point for processing mics on the fly.

OFF TO THE RACES

We added the Strata 32 console to our news operation last September just as we began planning for the Kentucky Derby Festival’s “Thunder Over Louisville” fireworks and air show and the Kentucky Derby race, content which our 200-person staff produces every year at nearby Churchill Downs.

COVID-19 has bumped the race from the usual April and May timeframe to Sept. 5, and we plan to set up in the usual location near the Kentucky Derby Museum. For this year’s Derby, we’re told that protesters will be on site, so it could be interesting.

Throughout it all, the Strata 32 will be in the newsroom as usual, taking it all in.

David Callan is the media director of production for Louisville’s WDRB TV 41 and WBKI TV 58 TV stations. He can be contacted at dcallan@wdrb.com.