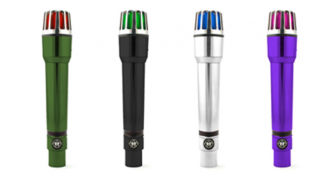 Company founders understood that surround sound was here to stay, and that the only available method of creating multichannel audio was cumbersome and expensive. For example, capturing audio from a half-dozen or so sources placed throughout a sports arena yields discrete tracks that can effectively be mixed in post, but this process demands a lot of setup time, as well as the expense of booking additional time in post. Then, there are the dangers that come with exposing technology to the environment.

Over the last 20 years, Holophone has released a number of products, at various price points, that build upon the idea that the simplest and most effective way to record multichannel audio lies in constructing a multi-microphone device that emulates the way our brain receives audio from a surround field. Seven microphones built into one compact unit replace microphones placed throughout a vast sound field.

Holophone’s entire product line, including the Super C, will be on display at the 2013 NAMM show in Anaheim, CA.