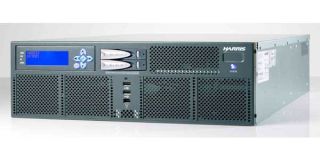 When I first came to Weigel Broadcasting’s WCIU-TV here in 2002 the station had minimal server architecture with no redundancy and a very limited potential for expansion. We switched to Harris server technology two years later and this provided us with new opportunities for scalability and on-air protection. The most recent upgrade enhanced that reliability and scalability to a level that we believe exceeds other server solutions on the market. We now have 12 Harris Nexio Amp servers in use, supporting a multichannel operation that includes several local signals and also providing centralcasting services for our South Bend stations.

The video server is one of the most critical components in TV stations and facilities today, and in considering reliability, the on-air protection enhancements from Harris’ Intrinsic Mirroring technology create a real-time storage mirror across our entire server domain during file ingest. This means that servers natively write content to two storage-area network (SAN) components simultaneously while recording. The technology also enables reading of content from two SANs and I’m not aware of any other serve on the market with this level of redundancy.

This is a remarkable advancement from the previous generation of Harris protection technology we used, which did reliably synchronize content between redundant SANs from a single server. However, the danger in that generation was that if the mirroring failed, the A side had the content and the B side would not. Intrinsic Mirroring now eliminates that possibility.

Speed and efficiency of content transfer has long been a consideration as we broadcast and centralcast multiple channels. The latest Nexio Amp upgrades have further quickened the pace at which we can pull programming from our SAN drives, thus improving the speed at which we can move content to air.

PLAYS WELL WITH OTHERS

We’ve also found the interoperability of Nexio Amp servers to be instrumental in our workflow. Weigel was one of the first broadcasters to transition to a tapeless workflow and it’s been reassuring that the Harris servers have cleanly integrated with our long-term SGL archive system, and seamlessly handle playout of transcoded content in cooperation with FlipFactory software and Rhozet transcoders. Our editing systems also transcode and deliver content to the servers without trouble. While native file playout is possible, our workflow makes it easier to simply have the servers play out transcoded content.

While Nexio has always been fast, efficient and interoperable, its reliability cannot be overstated. We have never had an on-air catastrophe. We require that our servers be workhorses, and that they have proven to be just that.

We’ve found that the new fiber switches also simplify scalability further. We can add anything from a single channel to four additional channels per frame on short notice. We’ll be adding a 13th Nexio Amp early this year to support additional on-air expansion. It’s hard to envision using another server, given the success we’ve had with Harris.

Kyle Walker is director of engineering for Weigel Broadcasting. He may be contacted atkwalker@wciu.com.