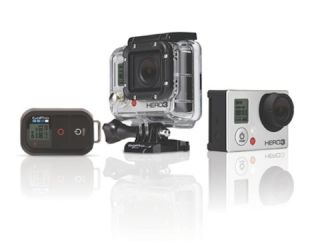 GoPro has announced global availability of its new line of HERO3 cameras. Debuting in October, the HERO3 is now shipping worldwide and is available in three models.

GoPro’s flagship model, the HERO3: Black Edition, is the most advanced GoPro camera ever. With no expense spared in its development, the HERO3: Black Edition is 30 percent smaller, 25 percent lighter and two times more powerful than previous models. Wearable, gear mountable, and waterproof to 197ft, the Black Edition model is capable of capturing ultra-wide-angle HD video at 1080p60, 1440p48, 720p120, 2.7Kp30 fps and 4Kp15. The camera can also capture 12-megapixel photos at a rate of 30 photos per second. Built-in Wi-Fi, GoPro App compatibility and the included Wi-Fi Remote (normally a separate $79.99 accessory) make the camera a powerful and versatile system for capturing and sharing immersive and engaging footage.