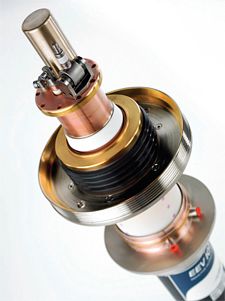 An e2v IOTD2130 30kW IOT
OCALA, FLA.—Trinity Broadcasting Network is the third largest group owner of high power television stations in America, and uses a variety of transmitters, including Thomson, Harris, and Acrodyne. All of these have something in common—they all use EEV IOT power tubes.

In Trinity's group of 35 full power stations, there are 30 tube type transmitters in use, and all of these are configured with two high power amplifiers, adding up to a total of 60 EEV power tubes. My experience with EEV's tubes goes back quite a ways and has always been good. Their products typically just keep on running, unless acted upon by an outside force.

One of my recent projects involved relocating and converting an analog Thomson model for digital operation.

We were going from a 500 kW ERP with a short tower and feedline run to a configuration where we needed 1,000 kW ERP on an 1,100-foot tower. This would eventually involve using both of the HPAs combined to deliver a base power of 41 kW.

After setting up one of the transmitter's high power amplifiers at the new site, I attempted to bring up the old IOTD2100 tube that came with the HPA. This particular IOT had been very dependable throughout all of its analog life and had racked up more than 65,000 hours of operation. However, with all of that time, along with an additional two years of sitting around unpowered, it just couldn't deliver the sort of power that I was going to need.

I knew that the old tube had to go, and as I had to get to another job site as soon as possible, I called Dominic Piarulli at e2v to see if they could help me out with a rush order. Dominic told me he could arrange an overnight delivery (my call to him went out at 3:00 p.m.), and sure enough the new IOT, along with a new CX2708 thyratron for the crowbar circuit (highly recommended by e2v whenever an IOT is changed out), as well as a replacement bullet for the output coupler, all arrived at my Memphis job site at 7 a.m. the next day.

To provide a little extra power margin, I upgraded the 25 kW HPA with a new e2v IOTD2130 30 kW tube, and once the new tube and thyratron were installed, I was easily able to get the full rated power from the HPA.

The second HPA has yet to be moved on site, so it's going be a little while before I'm going to be able to get the full 41 kW planned, but for right now the single unit is operating very satisfactorily with the new 30 kW IOT.

I'm looking forward to returning on site once the second HPA has been delivered and plumbed up. And like anyone in this business, I'm hoping that the IOT associated with that HPA makes power, but if not, I know that I can depend upon e2v for ultra fast support whenever I need it.

Steve Hastings began working for TBN as network RF manager in 1989. He may be contacted at motohastings@earthlink.net.