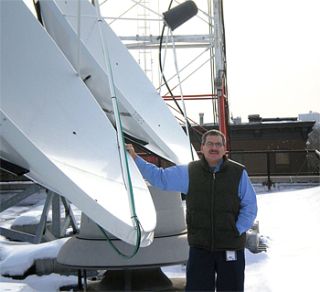 As part of the diocese, Trans Video Communications (TVC) has been providing full-time instructional television used by educators in Catholic schools throughout the region since 1966.

A few years ago, when we decided to overhaul some of our satellite downlink facilities, DSI RF Systems was the logical choice, as the scope of the project was directly in their area of expertise and the company's primary location is very close to New York City, making scheduling very convenient.

A site survey was done to ensure that the desired satellite look angles were available from our location and to make sure that proper mounts would be available to handle the load of the new steerable downlink antennas. Also, we wanted to determine that there would be no structural issues with placing the antennas and mounts on the building.

The DSI team recommended 3.8 meter antennas with both C- and Ku-band feeds and LNBs, non-penetrating roof mounts and a list of associated hardware required.

As a non-profit organization, it's important to save money, and with DSI RF Systems, we felt that we had a partner who understood that, and one who would provide us with the best satellite systems for our money.

NO GLITCHES OR WORRIES

Once the contract was signed, DSI soon acquired all the necessary hardware and coordinated a delivery schedule, which included arrangements for a crane to hoist the equipment up to the rooftop of our headquarters building. They managed the whole project very smoothly, allowing me to focus my time and attention on other issues.

After assembling the mounts and loading them with ballasting materials, DSI then installed our new antennas, ensuring their proper alignment with the satellite arc. While they were installing the new dishes, we also had them re-peak an existing antenna. Once the new downlink hardware was installed, new RF and control cables between the antennas and our control room were run, dressed and properly terminated.

From there, testing and commissioning went very quickly and smoothly. After the installation was completed, the job was clearly documented and the jobsite cleaned up, which included the disassembly and removal of some of our older satellite gear from the rooftop.

We're can now receive C- and Ku-band satellite feeds worldwide, including Vatican TV, Fairfax Educational TV and many others.

DSI RF Systems truly made my life easier by managing all the processes, while keeping me well informed through the project. I know that when I need them again, DSI RF Systems will just be a phone call away.

Juan Morales is director of engineering for Trans Video Communications. He may be contacted at jmorales@netny.net.