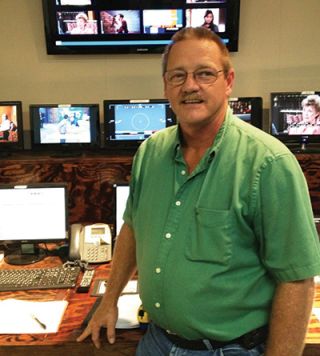 GULFPORT, MISS.— When we faced the challenge and expense of converting to file-based operations, we investigated Digital Broadcast’s MediaFire IP system. We had experience with Digital Broadcast, as we were already using the company’s baseband MediaFire master control system and it became clear that the IP solution would make our operations much more efficient and economical.

With the MediaFire IP system, incoming material is scaled to HD and/or SD as needed and the bitrate is automatically conformed for playout. The system splices the material and selects the output sources according to the MediaFire Automation schedule, thus eliminating the requirement for a physical MC switcher. In addition, Digital Broadcast’s Graphics Engine provides logo insertion and crawls on MPEG-2 and MPEG-4, eliminating the need for a downstream logo insertion. EAS and PSIP interfaces are also supported. There’s also a multiviewer function with monitoring of up to 10 sources.

The ability to incorporate some of our existing server equipment into the configuration added to the system’s cost efficiency.

We originate three channels from our facility with feeds from three network providers and receive material from Pathfire, Pitch Blue and others which needs to be conformed before airing. MediaFire IP’s conforming engines process the video and normalize audio from these sources so the material is ready to air, without any format conversion or other prepping.

SMOOTH AND EASY TRANSITION
Our engineers easily adjusted to the new system, as they knew in advance and accepted that there would be some changes in the way we did things.

We are very pleased with the overall system and with the cutting-edge technology and cost efficiencies. We are convinced it is our path to the future.

Also, our experience working with Digital Broadcast management and developers has been very good. They helped fine tune MediaFire IP and actually sent a software developer to our facility, which allowed him to understand the workings of our TV station. He was able to make on-the-spot adjustments to the software that directly addressed the needs of our master control operation. This sort of direct input and user feedback doesn’t happen that often in this business.

Based on the success we’ve experienced with MediaFire IP, our parent company, Morris Multimedia, anticipates moving other stations to this system.

Ray Luke is operations manager and chief engineer at WXXV-TV, a Morris Multimedia station, and has been with the operation since 1987. He may be contacted atrluke@wxxv25.com.

For additional information, contact Digital Broadcast at 352-377-8344 or visitwww.digitalbcast.com.