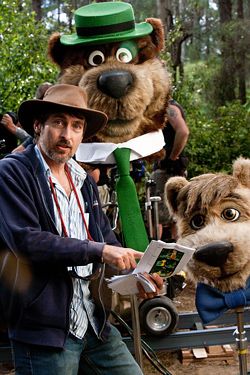 Director Eric Brevig on the set of Yogi Bear 3D offers a case study.
DCS 2011 (formerly Digital Cinema Summit) will feature an intensive two-day schedule of sessions covering a wide range of subjects related to digital cinema, 3D in theaters and in the home, new imaging technologies and much more, April 9-10.

Co-produced with the Society of Motion Picture and Television Engineers (SMPTE), the summit is sponsored by Sony Digital Cinema 4K, with Pacific Interface and RealD.

“Last year, the event put a lot of its focus on 3D,” explains SMPTE President Peter Lude, “and much has happened in the marketplace since then. We’re seeing the launch of exclusively 3D television channels. We’ve also seen a great deal transpire in the area of 4K digital cinema. This year, we’re saying, ‘We know about 3D. We know about 4K. Are we done?’ And of course, the answer is no!”

One keynote features VFX and stereoscopic production expert Rob Legato, whose credits include “Avatar,” “Shutter Island” and Martin Scorsese’s upcoming 3D feature, “Hugo Cabret,” DCS will offer insights to -- and a look at lessons learned about -- the new ways 3D technologies are being used in features.

“‘Hugo Cabret,’” says Legato, “is one of the first primarily dramatic feature films to be entirely photographed in digital stereo that doesn’t rely on the typical action, adventure or visual effects [genres] normally reserved for this technology. The drama embraces 3D solely for its artistic merits and unique ability to enhance the depth and breadth of character, locale, and story. Martin Scorsese produced, designed and directed every setup of this film specifically in 3D to explore and enhance the creative storytelling opportunities of this new art form.”

Similarly, notes Lude, speakers from the TV realm will share their experiences about applications of 3D television that worked -- and some that didn't.

“People understand the technology and theory of 3D,” he says, "”and now we all want to learn about specific applications. What works for basketball? What works for soap operas?”

Sunday, the program will expand to include other technical issues and their implementation. Here, too, the questions will expand beyond addressing how certain ends can be attained and explore the “why.”

Lude expands: “What do we have to do to prepare for 4K or 6K? We’re starting to hear about 8K and higher frame rates. Do we want the option of 60 fps for sports broadcasts? If so, how do we get there? As productions can make use of a wider color gamut, what will it mean when there is content available that can contain shades of colors that can’t be displayed on today’s televisions?”

“If you have expanded bandwidth,” he continued, “is it better to use it for expanded bit depth, higher frame rate, more spatial resolution? Is the answer different for different types of material? What are the creative implications and what are the standards implications? These are the questions we intend to delve into on Sunday.”

DCS 2011, adds SMPTE Executive Director Barbara Lange, represents key aspect of her organization’s growth within the industry. “We want to bring more awareness to SMPTE’s ongoing work across all the different distribution and content creation arenas and continue to expand awareness of our membership,” she explains.

Stressing the organization’s venerable history, Lange points out, “In 2016 SMPTE will be 100 years old. There aren’t that many industry associations that can say that. And as digital cinema, gaming, IPTV, mobile platforms and so much more evolve, you’ll see SMPTE involved in those developments. The DCS is going to be a very exciting two days and I’m very much looking forward to it."