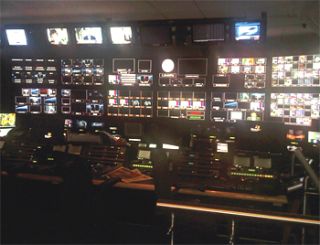 WASHINGTON
Today, "fiber transport" has become a necessity not just for cross-country connections, but for covering ENG news in HD and the always-busy news scene in Washington, D.C.

For CBS News, which has a long history in fiber optic communications, dating back almost 30 years, fiber is becoming a necessity for its live news hits. In fact, two of three CBS owned-and-operated satellite uplink trucks have been equipped to accept fiber optic feeds directly from the Sony PDW-700s, PMW-EX1Rs and PMW-EX3s that CBS News crews use. Each of the two trucks is equipped with a portable MultiDyne LiGHTBoX bidirectional field fiber transport unit. The battery-powered LiGHTBox can accept multiple fiber-optic inputs from various sources (HD, audio, Ethernet and data), and then combine them into a single multichannel feed for transmission over a long distance fiber optic link.

CBS News control room HD47 "When HD came in, we knew we had to switch from copper to fiber," says Mel Olinsky, CBS News' director of bureau operations and the person in charge of the network's ENG field units. "With copper and SD, you could send signals up to 1,000 meters from the camera to the SNG truck. But HD cuts that margin down to just 200-300 meters at best, which is unacceptable. In contrast, fiber has a virtually unlimited range, which makes it ideal for HD ENG work."

CBS News first deployed fiber transport for the 2008 Super Bowl, Olinsky notes. "We then used it to cover both the 2008 Democratic and Republican National Conventions, and have been running with fiber transport since then," he said. "It's faster, extends our distance, has much more capacity and doesn't run into the hub-and-spoke problems that copper-based networks can experience."

Of course, every silver lining comes attached to a cloud. In this case, the issue is fiber's lower level of durability compared to copper cabling. "Copper stands up better to being driven over than fiber, which breaks and can't stand up to sharp bends," Olinsky said. "As well, you can't splice fiber in the field the way you can copper; all fiber terminations have to be done beforehand. Finally, you need to have active equipment at both ends of the fiber, which we don't with copper."

These limits notwithstanding, Olinsky is very impressed by fiber optic transport. "We couldn't do what we're doing with HD ENG without fiber," he said. "It is that central to our field ENG operations."

"The circuits are a mix of analog, 270 MHz, and HD lit/dark fibers," said Bob McKinley, CBS News' director of operations in DC. "We're currently in the process of eliminating the analog circuits as we upgrade our remote facilities to HD. In addition, we are connected to CBS News in New York with two OC-12 fiber circuits."

The reason CBS News has analog fiber optic circuits—which are being replaced—is due to its early adoption of fiber transport in the early 1990s. "We are in a three-story building in Washington, surrounded by taller buildings, making it impossible to do microwave reception from our roof," McKinley said. "We were forced to have all microwave receive sites off-premise, and the microwave receiver outputs were fed to the bureau through fiber circuits. For security reasons, within various buildings it is also mandated that we operate in fiber, due to the higher security afforded fiber over copper cable."

Fiber played a vital role in CBS' coverage of Super Bowl XLIV in February Initially, CBS News relied on lit fiber transport; namely fiber-optic circuits provided by telephone carriers that are "always on," and thus always being charged for. However, the advent of "dark fiber"—unlit fiber transport that CBS News has installed by vendors and then maintains itself—is providing the network's Washington bureau with a less expensive way to cover the news.

"The primary benefit of dark fiber for CBS News is one of cost savings," said McKinley. "At locations that require multiple signal paths, it is possible to multiplex eight or more HD feeds on a single fiber. Obviously CBS News needs to invest in the electronics to multiplex, light and decode the dark fiber feeds. Depending on construction and fiber splice costs, for CBS News in Washington, once we get above three or four feeds from a common location, the economics usually favor the dark fiber approach over the lit service."

That said, relying on dark fiber has its risks. "With lit fiber service, if a fiber goes bad, you pick up the phone, call the carrier, and they dispatch one of their technicians with their spare parts to fix the problem," McKinley said. "With dark fiber, CBS News D.C. maintenance technicians must now keep the network operational. In our current economy when all headcount is getting closer scrutiny, the maintenance department needs to have sufficient capacity to take on this added work. And this can also dictate the investment made with the electronics to light the dark fiber... modular systems, where the various components can be replaced relatively inexpensively undefined, turned out to be the best approach for the CBS News dark fiber network in DC."

The bottom line: Fiber transport keeps CBS News on top of what's happening in Washington, D.C. "As it makes financial sense to install new dark fiber, we will do so," McKinley concludes. "Typically we are always looking at locations in the D.C. area that can be better served for newsgathering purposes if permanent circuits were available."