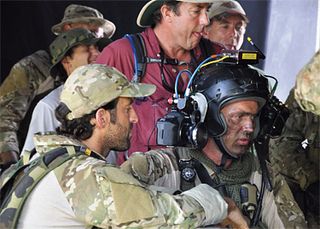 HOLLYWOOD: "Act of Valor," is a Bandito Brothers film that was produced and directed by Mike "Mouse" McCoy and Scott Waugh. The work was written by Kurt Johnstad and is a fictionalized thriller that stars active-duty U.S. Navy SEALs. The production sets a new standard for action movies, with its fast-paced point-of-view shots captured using lightweight, highly mobile Canon EOS 5D Mark II digital SLR cameras.

Shane Hurlbut, ASC, (top center in red shirt), sets up a skydiving shot with a Canon 5D Mark II mounted on a paratrooper’s helmet Approximately 75 percent of "Act of Valor" was shot using these cameras, and as a cinematographer, I think this was the right tool to use to tell the story. Our 5D Mark II camera packages were small and nimble, and never have I been so excited by the creative possibilities that such a camera could offer cinematographers, as its captured content can be seamlessly integrated with film.

I see the 5D Mark II as a genuine "game-changer" for several reasons. The first among these is due to the camera's big CMOS sensor's ability to collect light under widely varying levels of illumination. The video is very clean up to 1600 ISO. Also, the light gathering capability that it provides has a nice, very film-like gradient. Another very positive point is that the 5D Mark II's sensor also delivers a "VistaVision" film-like depth-of-field. In my way of thinking, no other digital HD camera out there can deliver these types of attributes. I found that it also delivers skin tones unlike any delivered by other cameras.

And the 5D Mark II's small size also provides the ability to capture first-person perspectives in a way that's just not possible with larger camera systems.

Another benefit afforded by the 5D Mark II camera system is that it enables a crew to travel unencumbered and go to locations never previously believed possible or affordable.

In shooting "Act of Valor," our production crew operated like a SEAL platoon, with six to eight guys multitasking the whole time. We would land in a country, scout the location, do the shooting, and then wrap. The physical size of the camera allowed us to transport our eight-camera production package in cases that easily fit in the overhead bins of planes. We also found clearing customs was simplified when officials saw that you were carrying digital SLR cameras.

More than anything, what I love about the Canon 5D Mark II is that it's part of a global revolution. I believe that it is causing a paradigm shift in the production industry, as it provides film-like quality combined with lightweight operation and amazing mobility. It's also quite affordable, so it's giving a lot of people a voice who have never before had one. I think the style of filmmaking that's going to come out of the use of the 5D Mark II camera system will be a whole fresh new style that hasn't even been named yet.

Shane Hurlbut, ASC, has captured moving images using practically every film and video format currently available. He may be contacted through hurlbutvisuals.com.