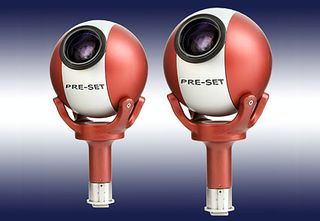 Camera Corps Q-Ball PTZ Camera
Camera Corps will unveil its latest version of its Q-Ball compact, remote-controlled pan/tilt/zoom (PTZ) HD/SD camera at the 2012 NAB Show.Demonstrated in prototype at IBC 2011 and now in full production, the Q-Ball camera’s new Pre-Set system allows 18 shot settings, (including detailed PTZ and focus settings) to be rehearsed and stored prior to a live event or real-time recorded shoot.

Settings are safely saved in non-volatile RAM even if the Q-Ball Pre-Set system is powered down between rehearsal and actual performance.Up to 72 heads can be operated from a single controller.The compact, weatherproof, multi-standard system is well suited to outside broadcast, live sports and entertainment broadcasts.