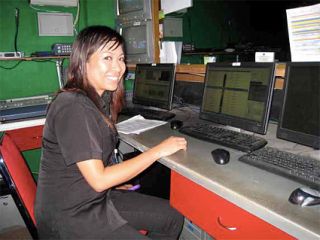 “The biggest challenge we are facing... is we don't have much money, so we have both insufficient technical equipment and a lack of human resources to operate a television station,” Erawathi says. Dewata only has about 50 employees, including administration and security staff, and only about 20-25 on the creative side.

Dewata TV started in November, 2007, and has just one channel, UHF 23, with a transmitter power of 10Kw. It has eight Sony cameras for production and “six or seven” Panasonic NV-MD9000/NVMD10000 cameras for news.

“We have eight cameramen who cover both programming and news,” says Erawathi. “We also have one reporter/video-journalist who can both report and operate a camera. He will go out and cover an event and then put the camera on a tripod to do the stand-up.”

In fact, all Dewata staff are expected to have the ability to operate a camera, edit, and even report. “Everyone should be able to multi-task,” she says, “although obviously some staff tend to be better at some things than others.”

That’s not all: “Everyone here has to be prepared to go on air and read the news if the presenter is not here,” Erawathi says. “This is so different from the established station here, Bali TV, as they have so many cameramen, reporters, and production staff. [Unfortunately] Bali is a small island and there simply aren't that many technically capable people to go around. But you could say we're a bit like that old rent-a-car slogan – 'We try harder'.”

For playout, Dewata TV is using two StreamLabs Tele 2.2 automatic playout systems for its daily programming, commercials, bumpers, and promos. “With this system, we can see a thumbnail of everything too,” Erawathi explains. “The second Tele is a backup.”

Dewata TV has three cameras in the studio – a Sony DVCAM with Carl Zeiss 20X zoom, and two Sony HDV 1080i cameras. There are two monitors in the studio, one of them serving as an off-air monitor. “We have a blue screen for the times we want to bring in a different background with our DataVideo Chromakey system,” says Erawathi.

“For video editing we use Adobe Premier Pro version 3,” says Erawathi. “It took our editors about a month to learn the basic operation.”

“We only have about half a dozen outside broadcasts a year, simply because we don't have the equipment to do it,” she notes. “We have no satellite capabilities, no SNG. If we need such equipment – when there is a big news event, such as a general election in the region – we hire it from Indonesian Telecom.”

“We are not planning on getting any new equipment,” Erawathi replies. “We are just trying to run the station on what we have now, trying to get by. Indonesia is supposed to be moving to digital TV by 2012, but obviously we as a station, and we as a nation, simply won't make it. It is too expensive, and we cannot afford it, nor can most consumers afford to make the change.”

The Programming Day Dewata TV starts transmissions at 5:30 in the morning, and goes through till 11:30pm at night. “Our competitor, Bali TV, starts even earlier – 4.30 or 5am,” Erawathi says. “That often means I have to be up pretty early.”

Dewata TV has three 30-minute news programs every day; at 6.30 am, noon and 6.30 pm. “That may seem quite early for the last news of the day, but the Balinese tend to go to bed early,” she explains. Meanwhile, Dewata TV “has to do both news and production with very limited personnel and we really can't handle any more than that with the resources we have.”

Traditional performances start at 9pm. Typically these feature dancing, theater, or anything else connected with Balinese performing arts. “We even have a comedy program featuring a Balinese comedian, basically doing a stand-up comedy show,” says Erawathi.

Dewata TV doesn't run any programs from overseas; it has only local programming. “We try to show what the Balinese people want to see,” she explains. “We have performances of Balinese dancing, 'wayang' or shadow plays, programs about Balinese art, and programs that reflect the Balinese way of life – both live and recorded.”

Once Dewata ran a program with international music – and got a lot of complaints about it. “People said they didn't want to see that sort of thing,” recalls Erawathi. “They want to watch themselves on TV!”

Yudith Erawathi feels that having television stations in Bali is a good way to help preserve the culture. “The Balinese see their culture as being more important and yet more sensitive to outside influences, than other cultures in Indonesia,” she says. “Indonesia has so many TV stations, yet there is very little chance for the Balinese to see their own culture reflected in TV programming. So it is good to have local TV stations here.”

Currently there are four stations on the island: Bali TV, Dewata TV, Alam TV (nature programming) and Bali Music Channel. “I don't see any more joining us, as the market is pretty well saturated,” she says. As for Dewata TV’s future prospects?

“I'm optimistic,” Yudith Erawathi replies. “If we can maintain our growth, we will become a force to be reckoned with. For myself, rather than own my own TV station, I hope one day to own my own radio station because before working in television, I was working in radio. And if I own the station, at least I won't have to get up so early!”