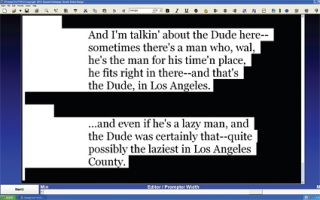 Display text from the 1Prompter Pro
My usual workload doesn't often call for a prompter, but when the need does arise, there's no acceptable substitute for rolling text on a screen. Improvised solutions don't cut it, and handwritten lines on large poster board is usually far more trouble than it's worth. The right tool for the job, getting talent to deliver specific lines, is a prompter.

Prompters used to be large and cumbersome things; however, with the advent of the laptop and lightweight LCD screens, they have become much more portable. Now, it's possible to use just the prompter software in a fully functional manner, with display on a second screen (rather than a reversible mirrored affair), in a very portable and almost intimate configuration, if desired.

1Prompter has been delivering prompter packages—both hardware and software—since 1994 on the late (and lamented) Amiga, and then, Windows platforms. The 1PromptPro software runs under Windows XP, 2000, 2003, Vista, and Win7. It also runs fine on Intel-based Macintoshes running Boot Camp or other software virtualization solutions, such as Parallels.

The installed video card used with the program needs to have at least 2 MB of video RAM and be able to support 64-bit Windows graphics acceleration. More video RAM is better, as it ensures smoother text scrolling in the prompter.

Prompter software has to be able to load, edit, and annotate text, and then display it at a size and speed that the talent finds convenient. 1PrompterPro does not disappoint. The software can load and edit plain text, rich text, and Word files, which pretty much covers the waterfront of the possible.

Editing functions are pretty much on par with a full featured word processor, and include standard cut/copy/paste, search and replace, block editing, spell check, and the always needed undo/redo. Script printing is supported.

Formatting tools are naturally less extensive as compared to what would be found in a publishing program, but are more than adequate for prepping text for display.

Formatting tools and choices include font selection (True Type from 8 to 48 points), all caps or all lowercase functions, width and margin settings, multiple colors for text and background, and support for all text styles (bold, italic, underline and strike through).

The package provided allows you to insert breaks, bookmarks, and all sorts of user marks to make possible the navigation and playback of complex scripts, (or or simple scripts in complex shooting circumstances).

Plenty of display and scrolling options make the software quite easy and reliable to use. Scroller Mode, as 1Prompter calls the set of display features, is best done on a second monitor that's controlled from the first. 1PrompterPro can be controlled from keyboard, mouse, or one of three USB controllers available separately (a trigger/trackball controller, ShuttleExpress, or a wireless RF controller).

No matter which control mode you employ, the controls for Scroller Mode are thorough. Users can adjust scrolling speed in small or large increments, jump instantly to the fastest or slowest speed, change scrolling directions, make and jump to the next or previous bookmark (place location) or to one of 10 specific locations in the script, turn on or off the position arrow that can appear on the left side of the Scroller Screen, and even use the Find function to jump to a specific instance of a word or phrase.

For this review, I ran and evaluated 1PrompterPro on a MacBookPro laptop under Parallels virtualization (WindowsXP). The application installed, got licensed, and ran very smoothly, and I imagine that if it runs well under this scenario, it would run even more smoothly on a Windows-based machine.

When I was first assigned this review, I didn't think I would find a practical use for prompter software in connection with the kinds of production jobs that I usually get. Then I got an out-of-the-blue assignment to wrangle a prompter (not a 1Prompter) for a producer/director on an infomercial shoot. The producer/director had, somewhat blindly, brought along a prompter setup, with the mirror to reflect the monitor-reversed display (camera shooting through the semi-silvered mirror), and shaky C-stand to hold the whole thing up. After some amount of experimentation, I finally got it working for him, but due to the extreme close quarters of the set, he decided that it really couldn't be used. as planned. The next few hours were then spent in making up large handwritten poster boards with the script lines. However, the talent ultimately rejected this methodology as unusable and much too awkward. At that point, I decided that it was time to take out the MacBookPro and 1PrompterPro.

Setup and script loading were absolutely easy and accomplished in a flash, which was really good, as the production timeline had slipped severely due to the talent's line issues.

I set up a second monitor for the prompter—this was a 15-inch LCD model that I'd brought along—and I was easily able to shoehorn it into the already cramped set at a camera-friendly spot and at a good eye level for the talent.

The prompter's keyboard controls made it easy to match the scrolling speed to the talent's pace of delivery, and to jump back and forth among several points in the script for retakes. The production schedule didn't have to wait for tech details to catch up, which always makes for a better feeling on set.

1PrompterPro is available as a quick download. Licensing is accomplished by an Internet exchange of number strings, and in my experience, seemed to happen fairly quickly. The application itself is feature rich and very responsive to controls, meaning it's simple and reliable to operate. Interface design puts all controls and menu options within easy and shallow reach, which adds to the streamlined feel of the software. Not everyone needs prompter software all the time. When you do need a prompter, 1PrompterPro software fills the bill very solidly and affordably.