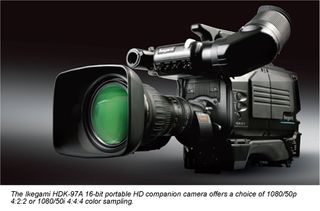 Delivering a choice of 1080/50p 4:2:2 or 1080/50i 4:4:4 color sampling, the new high bit-depth HDK-97A is designed for traditional-style multi-camera production applications. A docking-style camera, the new HDK-97A also features a 3G fiber-transmission system from the camera head to its CCU.

Transmission options include an HD-SDI QTV signal for teleprompter or program monitor use and an HD-SDI trunk channel that allows for connection of a second camera that doesn't have its own built-in fiber transmission system, such as a POV camera, including one paired with the HDK-97A in a stereoscopic 3-D application.

The HDK-97A camera operates with new and existing CCUs, including the 3G CCU-970, the 3G half-rack BS-97 and the new low-profile BSF-55 fiber base station.