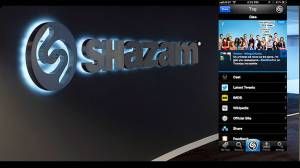 One of the most popular apps in recent years has been the Shazam app. No matter where you are, you can launch the app and quickly identify what the song currently playing in your environment is. Often with seemingly magical accuracy and with the ability to sift through a noisy Starbucks to find the exact name and title of the current song playing, the software has generated a swelling fan base of 250 million daily users. Now the next frontier has arrived, letting you discover what TV show is now playing.

The new “Shazam for TV” section of the app works to identify what the current show you are watching is. While it won’t work with some local-only shows such as broadcast news, the app will work with any channel, any programming, any time of the day for more than 160 U.S. channels. The process functions much the same way that the app has worked for music discovery. The software works to identify what show is playing in the background and then brings up links and further information. The info could be content via IMBD or Wikipedia, cast info, photos of actors in the show, trivia questions or social media activity happening during the programming.

The concept is not entirely new. Anyone following the mobile landscape for the past year has seen the progress of the second screen, the ability to tie in your handheld mobile device or tablet and have it provide information about the current programming you may be watching on your big screen. Advertisers are especially enamored by the concept because as consumers are whizzing by commercials on their DVRs, they often have their portable devices in their hands or at least close by. Several other apps have used sound recognition to accurately discover what show is currently playing and then load up relevant information, along with a dose of content-specific advertising. Want to buy the dress that the star of the sitcom is wearing? Here’s a quick link to a sale at JCPenney. Watching the game and looking for team jerseys? It’s now a click away via your mobile device on game day, during the game. While various apps have had some success, none have really broke out of the pack. The key point with Shazam is that it opens the gates to new second-screen technology to a huge base of users, most of which may never go hunting around for a content recognition app but may indeed use one if the software they already have includes it.

Shazam has been testing out second-screen recognition for the past year during select events such as the Super Bowl, the GRAMMYs and the Olympics, and has learned that a captive audience can work both ways, on the big screen and on the small. It has also worked outside the box and has been incorporating its technology into network commercials, where users will see a Shazam logo on the bottom encouraging them to load up their app and “Shazam” for more information (although 30 seconds seems like a short window). While social media propeller-heads breathlessly host webinars on how QR codes can help your business, the fact is that many consumers may not take the time to download a QR code app and then scan a code from a magazine or product. There are a few steps to take as well as the lining up of the scan for correct recognition. Shazam makes things easier because really all you have to do is hold the device up in the air, and the app will quickly capture the information from the entertainment you are now consuming.

The app is available for free on iOS, Windows phone and Android, and Shazam is planning to beef up the technology even more by including social media hooks. The app will soon tie in directly to the Facebook API, allowing you to see relevant social media content tied into your current show, including your friends' activity. You’ll be able to tag music or a show and join in a conversation with others who have tagged the same thing. This could be a powerful combo and one step closer to bringing the second screen directly into the mainstream.