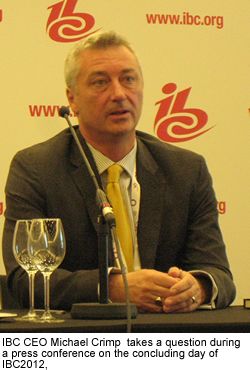 As IBC2012 came to a close in Amsterdam Sept. 11, show organizers announced a new record for attendance of 50,937, up nearly 1 percent from the previous record set last year.

During a press conference hours before IBC2012 closed, IBC CEO Michael Crimp declared the event to be a success from the perspective of attendance, program content, speakers, awards and the ability to attract interest from the next generation of “rising stars.”

“That we have drawn a record audience at a time when there are still economic challenges in many parts of the world – and when broadcasters are dealing with massive events like the London 2012 Olympic and Paralympic Games and U.S. presidential elections –clearly shows that, above all, IBC is relevant to people at every level in our industry,” said Crimp.

This year’s IBC conference was noteworthy for its speaker lineup, which included more than 300 media experts. In a bit of a departure from previous years, IBC2012 will also be remembered for its ability to attract top recording artist and producer will.i.am as the keynote speaker. As Intel’s Director of Creative Innovation, will.i.am inspired keynote attendees with his personal view of the future.

Another notable change from previous years was an expanded exhibition area at the RAI in Amsterdam with the addition of Hall 14, home to the IBC Connected World, which addressed the technology driving the explosive growth of content delivery to smart TVs and the multi-screen viewing experience. Besides exhibits, the IBC Connected World pavilion included a program of presentations and debates within the Demonstration Area and Connected Consumer Debates.