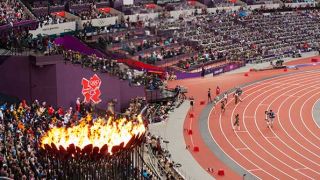 I visited the Olympics last weekend, specifically a tour around the International Broadcast Center (IBC). AT the heart is the host broadcaster, Olympic Broadcast Services (OBS). The IBC also house the rights-holder broadcasters like NBC, BBC and EBU.

The rise of multi-format delivery has transformed what the audience expect from a broadcaster. This means many, many feeds back to Headquarters. NBC has 48 circuits running back to NYC, requiring 10Gb/s of bandwidth, that’s four STM-16s. The BBC is airing 24 channels on top of two primary channels. All these extra channels allow viewer to see the event of choice, on television, via the web or mobile. One broadcaster remarked, “We are not going to have all this connectivity back from Rio.”

So it’s goodbye videotape, although I did see that the OBS archive all the venue feeds to DVCPRO. All the incoming feeds are recorded to a large EVS SAN, and the rights-holder can pull off the content they want. Producers and loggers get instant access to start selecting shots for highlights. The OBS has a metadata feed of all the stats that the broadcasters use for their graphics.

Most broadcasters are pulling the files into NLEs, then into encoders to create all the formats for multiple device delivery.

I’m going to run an in depth look at some of the technology in a later article, but the sheer size and scale of the IBC is impressive. It is amazing how far we have come since Beijing, as this is largely driven by the multi-format delivery. Even if you don’t have the spectrum for extra channels, OTT provides the answer, and now delivers HD streams to the viewer. This in turn creates the need for a system to manage all those streams from camera to the web in a cost-effective manner, both in equipment and manpower.

Of course most of the sports teams are old hands and have evolved their systems, adding new technology at each step, just like 3D at the World Cup two years ago.

I was amused watching the womens’ beach volleyball. Once the game ended, and the mens’ team came on, the 3D crew left along with some of the press. Is it sport or entertainment?