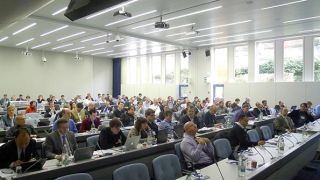 The EBU Production Technology Seminar 2013 had plenty of discussion about new technologies like 4K, but it was the mundane that drew just as much interest, specifically automated QC.

Quality control is traditionally labor intensive, but now that content is handled as files rather than on videotape, the opportunity presents itself to use smart software to comb through files for errors. Presentations focused on the workflow needed, how exceptions are handled, and what still needs a pair of eyeballs.

QC presents a big challenge to broadcasters now that content is reversioned and reformatted for all manner of distribution channels. There is not the revenue in the long tail to allow for traditional human QC. Therefore, automation is the only option.

The EBU has a group looking at QC in file-based workflows. The remit covers ingest, transfer from the legacy archive, final program delivery and program exchange with other broadcasters. Many parameters can potentially be tested, and, so far, the group has created 50 templates

Automated QC starts with basic workflows driven by watch-folders, with reports to operators indicating pass/fail. However, many questions arise. What tolerances should be used on measurements? When is automatic repair suitable, or should a file be rejected? This applies especially to parameters like loudness, which can be fixed automatically. And, even with the best automated technical QC, programs still need editorial QC.

One presentation from Magnus Åström of Swedish Television described the system they have built to check the quality of files ingested from their old tape library of 70,000 tapes. The program will take three years, with around 70 to 100 tapes being digitized daily. Their ingest and QC is fully integrated with an Ardome MAM (Vizrt). At the end of the project, they will free up 50m2 of valuable office space, and rid themselves of tapes, to be disposed of after satisfactory QC, weighing in at 40,000kg.

Another topic of discussion during the seminar was the service-oriented architecture (SOA) and its application to broadcast, and, of course, QC should present as a service to the SOA orchestration engine in future broadcast systems. Most QC products are sold as standalone, and must be integrated with DAMs, ingest systems and the rest of the broadcaster’s file processing platforms. Development like the joint EBU/AMWA project FIMS (Framework for Interoperable Media Systems) should ease the transition to joining up these disparate systems.