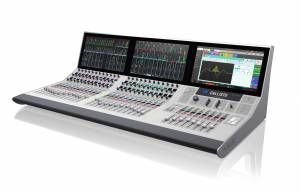 Calrec Audio unveiled its Callisto audio console for live broadcaster at IBC2013. The console is designed for those who need to produce creative and engrossing broadcast audio easily, but may not require as many resources as the company's Apollo and Artemis consoles.

The console's lean construction keeps components and materials to a minimum. Disciplined power distribution means the console is around 30 percent more efficient thana comparable Artemis Light. Service access is from the front of the console, and the entire control surface can be replaced by removing just 12 screws.

Users control the console via a 17in multitouch screen inspired by familiar tablet technology, with a straightforward interface that uses established finger gestures to navigate the system. Callisto's physical control surface is available in fixed 32- and 44-fader configurations with a new streamlined layout. Each channel strip has only the most essential mechanical controls, featuring a fader, two flexible control cells and a dedicated gain pot.