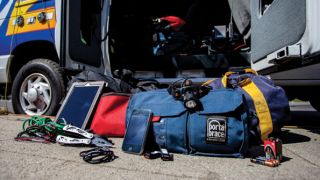 I am a news photographer. I go out with a camera and a microphone to record images and sound for a television newscast in the Los Angeles market.

It has always been my experience that my job is easier when I have the right tools. That said, a problem I face is that every story is different, and sometimes bringing the right tools in addition to the camera and microphone is a difficult choice to make. As much as it might be nice to have a magic bag that can hold all of your specialized widgets, gadgets, cables and other assorted goodies collected over the years, it (in my experience) doesn’t exist.

So, it pains me to admit, but we’re physically limited as far as how much we can carry. In other words, while it’s not an absolute, get used to the idea that you can’t always take it with you. Carry what you might need, but you have to find your own sweet spot.

It is possible to travel light with just a camera and microphone. At the opposite end of the spectrum, however, you’ll find the “kitchen sink” photographers. They are the human embodiment of “be prepared.” They drive the overloaded van, carry an oversized fanny pack and fear being caught with only eight BNC barrel connectors. That said, naturally, I’d never poke fun at them since I’ve been saved once or twice (OK, maybe a dozen times) by the shooters who do
carry everything.

Certainly, there are items that are not optional. The tripod is optional (no, Rembrandt, you don’t have to have one), but the camera and a microphone are not. Also, don’t forget an extra disc, tape or memory card (or whatever you’re recording on), and spare batteries for the camera and wireless mic transmitter. (I think we’ve all learned this from experience.)

The further the walk back to the truck, the more precaution one should take not to lose recording ability. Wireless audio technology is pretty reliable, but never is it 100-percent guaranteed. XLR audio cable has saved more than one interview.

If you look into my bag, you’ll find a pocket multi-tool — the kind that has knife blades, screwdrivers and unfolds into a pair of pliers. Just be careful about carrying it all the time. I always stop carrying it each time I lose one to an airport security checkpoint. And, of course, I’ll buy another one when I’m caught without and need it in the field. Also, I keep an LED mini-flashlight as well as a headband hands-free LED light.

If you’ve looked around recently, you might have noticed the broadcasting industry has its feet firmly planted in the digital age. My station converted to Sony XDCAM disc-based acquisition more than five years ago. We’ve also slowly begun migration towards SD card solid-state recording media. Shooting on disc and having the availability of a nonlinear edit system in the field has prompted my own purchase of two items that people cutting tape-to-tape never needed — a USB thumb drive and a portable 500GB external USB hard drive.

Both drives allow me to transfer and archive edited stories without having to hook up a laptop. They also give me the ability to copy and transfer visual digital material from other computers. I first used a 4GB thumb drive that would get me through most transfers, but I recently picked up a 32GB replacement because, apparently in storage, size matters.

As long as I’m talking about the more gadgety items in my life, I might as well admit that even though I’m a long-time PC user, Apple products have creeped into my world.

Yes, an iPhone and iPad have become nearly indispensable to me. They’re like the Swiss army knives of the digital age. I use them for GPS and general information on a daily basis. They’re good for taking notes and offer another option for text or social media communication. In a pinch, the iPhone can (and has) serve as a backup video camera. They’re not mandatory, but they can sure make the day easier.

A multi-format USB memory card reader also is handy to have. I’ve taken digital still shots and video into our computer from pocket cameras and even cell phones. I also still carry a set of cables that adapt RCA (standard consumer audio/video connectors) to BNC/XLR (standard grownup connectors). I’m just finding that I use cables less frequently.

Not everything one carries is a technical piece of gear, however. Should you ever get stuck on a fire or snow story miles from home, you’ll quickly learn to keep handy a toothbrush.

I have my passport with me at all times because I really hope to someday hear the news director yell for someone to jump on a plane somewhere (heck, anywhere, I’m not picky). On the travel front, I keep separate bags packed — one with fire and safety gear and one with an assortment of clothes for different climates. We happen to cover a wide geographic area. It might not be snowing in downtown Los Angeles, but we have mountains and ski resorts within easy
driving distance.

Again, you can’t take it all with you, but sometimes a breaking news story isn’t over by the end of a shift; i.e., you may not expect to spend a night away from home, but it happens.

You can plan, pack and try to anticipate every possible scenario, but there’s always going to be some practical limit on what you can carry.

At the end of the shift, I think it’s not so much about the tools and gadgets we use to get our jobs done; it really depends on the resourcefulness of the person doing the job. Regular people like me go out and make it happen. It’s not always easy. Sometimes, we have the right tools, and other times we have to do what we can with the equivalent of two sticks, chewing gum and rubber bands. The point I’m making is that good news photographers will make air
regardless of the gear they have or don’t have.

In closing, I am not the guy who carries a ton of gear to every story. But, I also don’t want to be the guy missing needed tools. As a photographer, what I pack is up to me, and I just want to have what I need to handle most situations. It’s called the sweet spot, and it is where I think you’ll find the best news photographers.

—Bryan C. Frank is a news photographer in the Los Angeles television market.