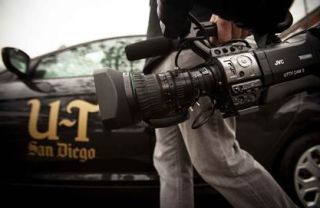 Manchester Lynch Integrated Media, which purchased the newspaper in late 2011, built the U-T TV operation from scratch earlier this year. Housed on an upper floor of the U-T San Diego facility, the studio houses three sets and is used to produce 12 hours of live programming each day.

“Our studio was built with an open floor plan and actually is in the middle of the U-T San Diego news floor,” explained Paul Forgét, U-T TV production supervisor. “Part of our morning set looks directly into that newsroom as the background. It’s an appropriate backdrop for the blending of print, television and Web, which exemplifies the new strategy of an integrated media platform.”

The station covers news from all of San Diego County. Programming is available on the Web at utsandiego.com and is also available to AT&T U-verse and Cox Cable subscribers. Forgét believes the multi-platform approach will likely become a benchmark for other media outlets.

Five of the GY-HM790 cameras are used for ENG coverage, while one is used in the studio as a handheld unit during broadcasts.

U-T TV embraced JVC’s native file recording to non-proprietary SDHC media cards. “I could not imagine ever using tape as media again,” Forgét noted. “Working with SDHC cards gives U-T TV the ability to acquire and manage media quickly and efficiently. The .MOV file format is a no-brainer. It simply allows us to operate at max efficiency with our NLE.”

Forgét said U-T TV’s shooters are also pleased with the performance of the ProHD cameras in the field. “We are very satisfied with the image quality of the GY-HM790s,” he said.