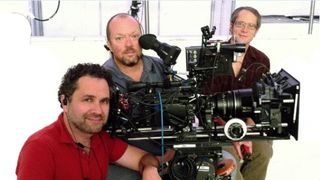 Comedy Central’s sketch comedy “Key and Peele” might be shot with a limited crew, camera and gear package on a mandated short shooting schedule, but that doesn’t bother cinematographer Charles Papert.

Producers of the series, which involves live comedy performances, wanted highly polished production value. No two sketches look alike, and all are shot on location or on standing sets. The crew used Sony F3s, Alura zooms and a set of Superspeeds,” he explains.

DP Papert insisted the support had to be from OConnor. As he said, "The 2575 is the industry standard and represents zero compromise on set." As a DP, Papert isn’t particularly hands-on with the camera, but to ensure that camera operators have the right tools to be able to perform shots without compromise, OConnor is the non-negotiable head of choice. Each operator has a different preference on how much drag he or she likes, and the continuous adjustment of pan and tilt makes dialing in the perfect setting easy. In addition, the ability to tilt the camera 90 degrees up and down is often a requirement for specialty shots.

Papert and crew really test the OConnor capabilities on “Key and Peele.” There are a number of situations that require a manual jib that sometimes puts operators into the unenviable position of having to maneuver around the arm for fairly complex moves, including back panning and tilting. With that kind of challenge, it’s absolutely critical to be able to dial in exactly the amount of drag that will allow for smooth camera moves while not restricting the swing of the arm.

“Key and Peele,” a classic sketch comedy show in the tradition of “Chapelle’s Show,” stars Jordan Peele and Keegan-Michael Key.